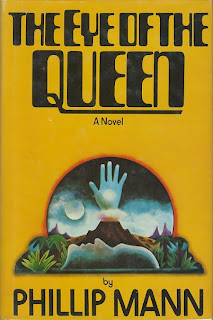 I had never heard of Phillip Man before reading Wulfsyarn but while reading it I was unexpectedly impressed with the level of humanistic writing Mann was capable of. His usage of the journal-like device was fascinating and I searched for his most acclaimed novel Eye of the Queen soon after.

Using a more pronounced device of the journal-like narrative, the style is captivating in its detail and chronological unfolding. The journal of Thorndyke chronicles his contact from beginning to end with the alien species Pe-Ellia, through the initial contact, the first awkward days on the new planet and the dismissal of his subordinate Tomas. The thirty-eight journal entries are often accompanied by Tomas's commentary on the specifics of each matter or historical background. This duo-layered journal device imbues the novel with rich detail spread out for the reader to mull over and consume.

The Pe-Ellia species are difficult to wrap your head around, seeming to be as alien as the title implies. Yet their commonality in their spiritual devotion and altruistic aura unveils a human-like base to touch. The Contact Linguists they both are, the road to understanding their alien counterparts must be lightly tread for risk of giving offense. The penultimate guide for this contact was established by Thorndyke but we witness him withdrawing from the very procedures he established. This alarms Tomas but, being the subordinate, he continues to chronicle the visit.

Mann seems to be able to create a humanistic character (like Wilberfoss in Wulfsyarn and here with Thorndyke) and allow the reader to sympathize with the self-styled human he has created in the pages. Certainly, these two characters are well developed but then they become a sort of empty husk, unsubstantiated by personal and external conflicts- the level of sympathy is always on the rise.

For fantastic insight and intimate detail, I can hardly look at any other author with the same passion Mann exudes in both Wulfsyard and Eye of the Queen. This is the pinnacle of humanistic science fiction along with Eric Brown's The Fall of Tartarus and J.G. Ballard's Vermilion Sands.
Posted by 2theD at 10:59 AM