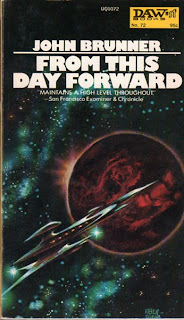 Aside from Entry to Elsewhen (1972), I haven’t been exposed to much of Brunner’s short work. Entry to Elsewhen was hit and miss (with once big, big miss) and made me leery of pursuing a larger Brunner collection of shorts. Being a big Brunner fan, however, led me to enthusiastically pick up From This Day Forward, with its thirteen morsels of Brunner talents between its covers. It thought it’d be a nice treat to end the year 2012 with a menagerie of Brunner-generated ideas to inspire my own writing in the coming year. Thankfully, many of the stories range from pretty good to great, and even the sestina at the conclusion is ripe with imagination.

The Biggest Game (1956, shortstory) – 4/5 – Royster is a narcissistic predator of rich, lonely women. Proud of his body and skin, he seeks women with husbands away, to coddle the women into including him in their living wills. Recently, at the gym, out at night, and outside his home, he has seen mysterious men in black watching him. On his date, spinning a tiger hunting story, Royster bores the lady and soon leans in for the kiss only to hear a shriek and commotion. His eyes widen. 12 pages

The Trouble I see (1959, shortstory) – 2/5 – Having premonitions of coming trouble since a young age, Joe is able to assume a “good boy” aura while stealing petty cash for a perfect gambling streak. Bored with small town life, he steals the money from a bar and heads to the city to make something of his premonitions. His style impresses a widower and eventually makes him heir to his fortune while the man’s daughter receives a trust fund. One day, Joe’s luck turns sour as he experiences fear—a rarity for Joe. 10 pages

An Elixir for the Emperor (1964, novelette) – 3/5 – Saved from a certain death in an arena of wolves, Apodorius walks free from Rome care of Caesar’s reprieve. To show his gratitude during a time when longevity elixirs being sought in the kingdom, Apodorius offers his much researched concoction, only to be fed his own mixture. Stabbed and pushed into the river, Apodorius returns to Rome a younger man and offers to mix the elixir again with the wealth of a Roman senator—the same who had fed it to him. 21 pages

Wasted on the Young (1965, shortstory) – 5/5 – Human society has become so rich that every person is allowed a 30-year free credit period to spend as they see fit. Some lavish lifestyles fizzle over time, but Hal Page is a party animal who throws ridiculously expensive parties with exorbitantly priced foods and destroyable relics. His 300-year debt to society is allowed to continue until his 32nd birthday when he’s notified of his credit off-cut. To stave the massive debt, he considers suicide. 13 pages

Even Chance (1965, shortstory) – 3/5 – In northern Burma during WWII, a plane crashed and its pilot inspired the Kalang tribespeople as he sailed down on white wings (a parachute). Years later, the village men sick and depressed, a boy searches for the white men and discovers a UN inoculation team who discern that the now passed out boy is struck with radiation poisoning. The Burmese government brings helicopters in, but the UN staff gather that the boy was in contact with something alien. 13 pages

Planetfall (1965, shortstory) – 3/5 – Stranded on Earth, Lucy dreams of the cities which dart amid the galaxy. Forever confined to his interstellar city, save from the one day of leave he currently has on Earth, Valeryk dreams of the open space and infinite possibilities Earth has to offer. Lucy and Valeryk meet atop a knoll, exchange ideas of romanticism for each other’s life. With time winding down, romantic visions can be shared or shattered. 17 pages

Judas (1967, shortstory) – 4/5 – Karimov sits in the steely back pew waiting for the mass of the metallic wheel to come to a close. Having spoken with the steely God before, Karimov requests God’s presence to the priest, who ignores his urgency and is attacked by Karimov for his disobedience. About to leave the church, a steely voice beckons Karimov to the altar, where his confession is heard, yet no penance shall be served. 8 pages

The Vitanuls (1967, shortstory) – 4/5 – Barry Chance from the WHO visits a maternity ward in India to witness the “patron saint” obstetrician named Dr. Ananta Kotiwala. Having been in the medical practice for sixty years and retiring on the next day, his love for the profession and the respect from his colleagues and has drawn the WHO’s attention because of their recent anti-aging drug. Destined to be a sunnyasi, Kotiwala may be a loss. 20 pages

Factsheet Six (1968, novelette) – 4/5 – Selectively sent to hundreds of investors and other business people, a recent factsheet, the fifth being the most recent, outlines injuries and deaths caused by faulty consumer products. Published by a single unknown person outside of any official capacity, the information is invaluable to a magnate like Mervyn Grey. His eager search for inclusion to this list and the specific name of its printer leads him from the Bahamas to London. 27 pages

Fifth Commandment (1970, shortstory) – 5/5 – Simply one of the seven hundred ninety-two Retirees at Kannegawa, Philip Grumman isn’t content with the retirement lifestyle. A hydroponics engeineer after the war, he and his wife were a childless couple and Philip reflects on this as he sees his friends in the retirement community are also childless. Consulting the doctor directors, Philip gets an impossible answer to his rather innocuous question. 17 pages

Fairy Tale (1970, shortstory) – 4/5 – Penning a letter to his professor friend seven years after the occurrence, Barnaby Gregg recounts his impossible tale while camping in Dartleby, Devonshire. While asleep, Barnaby hears his milk jug being disturbed and sees a miniature man of sorts, who becomes inebriated on the swills he takes. This leads Barnaby to a cave where another fairy spins an extraterrestrial tale of planetary envy and solar rapture. 13 pages

The Inception of the Epoch of Mrs. Bedonebyasyoudid (1971, shortstory) – 5/5 – Across the city of New York, four people put into motion their plans. Timed to cause great panic yet announced on the news as mere accidents, their greater plan of war retribution has begun. Free-fall ball-bearings, exploding gas tanks, and a subway gas attack are only three methods which the shadow organization will implement for just revenge on a country’s war and a people’s ignorance. 7 pages

The Oldest Glass (1972, poem) – 4/5 – A sestina about the alluring and truthful nature of the mirror and its earliest counterpart—water. Considering that the reflection is also a reverse image of its source, a mirror at once represents reality yet skews it; a ship’s departure from port, thence, also becomes its arrival from at sea. The lexical repetition of the six end-words reads: “All men, set back, long water.” 2 pages
Posted by 2theD at 10:53 AM