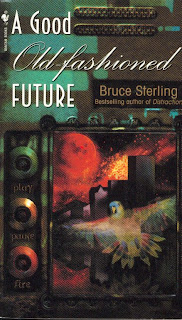 This collection definitely has a mid-90s internet boom feel to it. Bruce Sterling is a futurist so his writing style is embedded with loaded terminology, peripheral technologies, acronyms, gadgets and slang. Sterling takes an idea, runs full throttle with it, dragging along an arm full of other odd concepts and usually ends up swerving all over the place when he SHOULD be slowing it down and enjoying the scenery a bit. It's all a bit rush-rush with these stories. Maybe one or two rush-rush, get-things-done, wham-bam sort of stories in the collection would be interesting, but I guess you really have to be into this sort of thing to actually enjoy it.

His prose isn't very creative. He writes stories around ideas, not stories around words or people. Sterling likes to throw in paragraphs of technical explanation, either in narrative form or in (eek!) the middle of dialogue. It's like he took footnote information from a journal and pasted it into the story. It makes the story flow very herky-jerky.

It's all a bit too geeky for me, as if Sterling is merely writing for himself, as if he's just playing with the ideas in his head for his own amusement and putting it on paper. If zaniness is what you're craving then Adam Johnson, is his collection Emporium (2002), did much of the same thing but it was much better honed than what Sterling here has produced. If futurist ideas is what you're after, then Gibson's Burning Chrome (1986) would be a better purchase.

Maneki Neko (1998) - 5/5 - International ring of a social network of gift-giving/tax evasion catches the eye of an American assistant federal prosecutor. When Tsuyoshi,  a digital video converter by trade, finds himself involved in the prosecutor's arrival, it's discovered that the gifts aren't the only thing the network shares. 19 pages

Big Jelly (1994) - 2/5 - An artificial squid scientist sends a sample to an oil tycoon who joins forces with him to create an exotic range of transparent squid for commercial retail. Unfortunately, the helium that the squids ingest is causing a problem or two. 48 pages

The Littlest Jackal (1996) - 2/5 - A Finnish island separatist group hires an old terrorist to head a scheme revolving around the exploitation of a senile cartoonist and her intellectual rights in order to sue the producers of merchandisers in Japan. The cash will then be laundered through digital currency exchange on the to-be fledgling island nation. 54 pages

Bicycle Repairman (1996) - 3/5 - Sexually uninterested bicycle repair guy living off the grid becomes the center of attention of a female government agent after receiving a fairly innocuous-looking cable box in the mail from his ex-roommate Deep Eddy. 41 pages

Taklamakan (1998) - 4/5 - NAFTA Black Ops Pete and Katrinko should abandon their mission after their contact in the remote Asian Sphere desert dies in a crash. With punctual curiosity, the two investigate the huge domes finding that the ones they break into are just the usual nuclear waste dumps; except dome #13 which is home to two corpses and a deep, deep well which is, itself, home to as many mysteries as a 100-megaton nuked out subterranean bubble can hold. 51 pages
Posted by 2theD at 10:10 AM No comments:

Cast of Simple yet Complex Convicts (4/5) 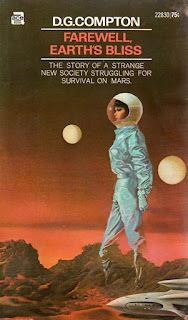 This is my introductory Compton novel but the author supposedly has many other excellent titles. Since those titles are out of my reach for now, Farewell is my first Compton novel.

Rear cover synopsis:
"The time is the future; space travel has encompasses Mars, finding it barren, without mineral resources, useful only as a dumping ground for socially unacceptable humanity -- a latter-day convict settlement.

A new shipload ot deportees lands, and the twenty-four new colonists, male and female alike, have to adjust themselves to the harsh life here, and to the unexpected new social patterns that have developed for defense against the hostile Martian environment. Before long, as the colony is shaken by dangers from within and without, the struggle becomes the most basic of all -- not for comfort, but for survival itself."

This Ace edition synopsis does the 188-page novel no justice. The synopsis above is a flat, unemotional copy written by a desk jockey and doesn't even attempt to set itself apart from all the other Mars novels at the time (such as 1964's Martian Time-Slip and 1969's The Sirens of Titan). If it would have cost more than one dollar, I wouldn't have bothered stocking it on my shelves with a lame synopsis like that. I've got a better one:

Spending nearly ten weeks cooped up in a cylindrical inter-planter javelin, the twenty-four social criminals are at their wits end. Having landed on Mars safely enough, they are met by the convict colony representatives who are both terse and unemotional. The representatives take the haul of food back to the colony while the recent arrivals wait for supportive assistant... until "the arrival of a dust storm. Visibility outside the space craft was down to a matter of inches. The dust storm stayed for thirty-seven day." With their numbers thinned, the surviving nine new-comers find their place in the colony, learning that maintaining the status quo is to survive. To err it to risk taking "the cold way out."

The slim thickness of the novel is misleading as the contents of the novel are quite complex. Of the nine surviving arrivals, seven or eight of them become central characters along with one or two other convicts already stationed in the colony. As a matter of plot device seeking to keep anonymity among the convicts, each space-borne convict is given a biblical name. The banality of the naming compounded by the numerous cast had me reaching for a pen to keep track of their names. These aren't cardboard cut-outs either, they are fairly well fleshed out:
Mark: once democratic leader, justice seeker
Issac: once cocky, now bed-ridden
Simon: illusionary charm, sly, racist
Jacob: black, non-confrontational, internally demonized
Ruth: judgmental and observant, yet crass
Joshua: artistic, cynical, pragmatic
Paul: delusional, self-proclaimed prophet
David: once the second in command
Martha: liberal American spinster

I use the word "black" above but Compton uses "Negro" and two of the less-tolerant characters use the N-word. It's thrown around quite heavily in a few passages and it characterizes Jacob as the prosecuted yet innocent victim. While ethic diversity isn't appreciated on my Mars colony, the acceptance of sexual orientation is unheard of with the penalty for simply being homosexual is "the cold way out." I don't think Compton is reflecting his opinion in this novel, but merely using lack of acceptance as a ploy to show the bigotry and simple-mindedness of the convict hierarchy.

It's a slow read at times, where I didn't know which route the plot was taking but little did I know that I was the one who was going for the ride. Like one quote on the cover states, it "quasi-Kafkaesque" and the last-page conclusion will have you nodding with understanding, rather than approval. Further Compton read are a must for me (Thanks Boaz!)
Posted by 2theD at 9:57 AM 5 comments: