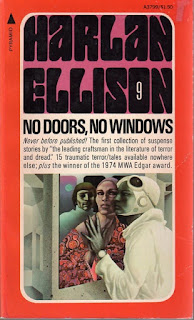 There are 173 pages of stories in this collection in addition to an indulgent and often straying 32-page introduction. Ten of these pages are scattered with comments about the involved stories, but like the remaining 22 pages in the introduction, the words course through the relevant and the irrelevant like a slalom skier between gates. Way too much digression to read through, so I had to skim and skip much of it… comments that also ring true for many of the introductions for the stories in Dangerous Visions.

What starts as a collection of suspense, borderline terror, and dread soon tapers off into repeated tales of sexism: women who are emotionally unstable, women portrayed as victims or sex objects (or both, in some cases)—in the end, women are just convenient vehicles to convey the manliness of the male characters. I don’t often rant over this kind of thing, but it is prevalent throughout the collection. Case in point:

But we do the best we can.

A lot of us learned the hard way about women, that you aren’t the chattel we thought you were, what we were taught you were through two thousand-plus years of tradition and bad novels by men. But we learned, and we’re still learning. And it isn’t that easy for some of us who were brought up macho.

But we do the best we can, dammit!

And maybe it’s only fitting that some of us, the biggest offenders, get back some of the shit treatment we gave out. And maybe it isn’t.

So get the fuck off our case. Learn which of us are the unreconstructed enemy and which of us are allies. And stop treating us like meat, the way we treated you for so long.

Otherwise, the best you’ll ever get from us is a nasty, pointless, frustrated FUCK YOU, BITCH! (185)

I’ve read only five pieces of Ellison’s SF work--“The Prowler in the City at the Edge of the World”, “Life Hutch”, "Count the Clock That Tells Time", "On the Downhill Side", and "The Song the Zombie Sang" (w/ Silverberg)--so this collection is my first exposure to him as a writer at large. Hopefully, I’ll enjoy the other collection on my shelf much more—Paingod (1965). There’s always been so much praise thrown at Ellison, so I’m eager to see where all that praise originates… for me, it’s certainly not from No Doors, No Windows.

The Whimper of Whipped Dogs (1973, shortstory) – 4/5
Beth is a simple notational choreographer from an all-girls’ school in upstate , now residing in the big, impersonal of . Having witnessed her first murder, Beth still hasn’t adapted to the urban social environment of rat-eat-rat existence, and her first sexual encounter in the city reaffirms this. Thereafter, the vicious city brings out the animalistic nature of her being. Her helplessness in the urban environment peaks when she confronts a thief, but to whom can she turn? 20 pages

Eddie, You’re My Friend (1975, shortstory) – 4/5
Through a autobiographical monologue, one man confronts his life-long friend named Eddie. Through the thick and the thin of their relationship—mainly thick though with the narrator on the receiving end of the misery, shame, and pain—he still considers Eddie to be a friend. After elementary school fights, high school party no-shows, university plagiarism, and adulthood adultery, the narrator sticks to Eddie, though the reason for the confrontation is that he needs one last sympathetic favor. 5 pages

Status Quo at Troyden’s (1958, shortstory) – 4/5
After eight years of daily routine in his city apartment, Mr. Huggerson is set upon this same routine as he lives out his remaining elderly days in the urban bachelors’ apartment building. The room, however, is paid for by his son who has recently come into some business troubles. When Mr. Huggerson receives his son’s monthly check, the amount isn’t enough to cover his rent and upkeep. With his routine threatened, he confronts the brusque landlord and, in a fit of brief rage, strikes him down, for better or worse. 13 pages

Nedra at f:5.6 (1957, shortstory) – 2/5
has been a professional photographer for decades. He’s shot some of the most famous women in the world, both clothed and unclothed. He also takes daily life pictures of the city, like on one fateful day. On that day, he spies Nedra on a park bench in all her pulchritudinous, sexual glory—a woman like he has never seen before. She quickly agrees to having her photo taken in the park, at his studio, and in the nude. After a lusty session on the bed, he begins to develop the prints that are without the image of Nedra. 9 pages

Opposites Attract (1957, shortstory) – 4/5
Erwin Beltman has a hobby that he likes to develop by himself yet he likes to share the results with other. In his ripe old age, many would turn to gardening or literature, but Erwin has a passion for making pipe bombs and placing them in public areas. The press and police dub him a “mad bomber” but he isn’t mad at all, he insists—he’s just a hobbyist, an enthusiast. His identity remains secret, but one day a lady spies his pipe for what it is and follows him during the proceeding days; Erwin has a plan to rid himself of her. 11 pages

Toe the Line (1957, shortstory) – 3/5
Having been in prison for the third time, Eddie tells the warden upon leaving that his days of lifting cars is over. As he returns to the real world, he gets a job at a place where he knows the trade: a mechanic. His intentions are nefarious though as he also returns to his old retinue of thieves. Eddie, bent on not getting caught and pulling in a decent profit, has just the plan to look legit: use the shop’s tow truck. After learning the ropes, all the lifting goes without a hitch, until a murder is pinned on him. 10 pages

Down in the Dark (1967, shortstory) – 3/5
Kenneth has the idea in his head to hunt in javelina in the desert with the topic of weapons that he discusses at the bar with Griff. Griff quickly agrees to guide the hunt after seeing Kenneth’s wife. Then, after dinner and drinks—when Kenneth passes out—Griff further agrees to two more things: a late-night tryst with Ivy, the wife, and a taking part in the eventual murder of her husband. With thoughts an being the predator far away, Kenneth becomes the human prey in the desert cave. Griff and Ivy both take different aims. 9 pages

Pride in the Profession (1966, shortstory) – 3/5
A good old-fashioned lynching was Matthew Carty’s prime motivation to become a hangman. One just doesn’t become a hangman, however, in Matthew’s eyes; the execution is an art and a science. Through his life, he dabbles in physics, geometry, biology, and woodwork so that he can better understand and better execute the intended prisoner. He earns a reputation in the states where hanging is still a method of execution, which culminates in his assignment to hang Dr. Kolles. Unlike other cases, Matthew is compelled to meet the soon-to-be-dead prisoner. 13 pages

The Children’s Hour (1958, shortstory) – 3/5
Each of the thirty years that followed WWII were fraught with violence, racism, assassinations, tension, and murder; petty escalations broke out in Europe, Asia, Africa, and the Americas. Even after the establishment of the UN and the International Police, conflict still ruled the world as it sat on the precipice teetering toward apocalypse. When tensions shattered on 3 June, 2975, the UN held an emergency session that was interrupted by strange guests and their strange warning: kids saying that the wars had better end or else they would leave. 7 pages

White Trash Don’t Exist (1956, shortstory) – 3/5
Charles is a bit slow but he has perseverance on his side. His menial job of moping up the diner is punctuated by verbal abuse and threats from the local head honcho—Herm Cressman. Charles’ safety is uncertain when he’s tipped off that Herm intends to entrap Charles into making a move on his mistress, who’s also a waitress at the diner. Charles evades every compromising situation, but finds a lull in resistance at the girl’s home. When Herm finds out Charles finds himself on the run. 13 pages

Thicker Than Blood (1958, shortstory) – 3/5
Roger married Felice for her money but has never seen any of it from her stingy family. As a result, his less-than-competitive linoleum shop is sinking and he finds very little in his life on which to cling. His step-daughter is a tolerated nuisance to the marriage, but Roger has a plan to turn his poor fortune into true fortune: fake a kidnapping, forge a ransom note, stash the girl away, and await the cash to keep him afloat. All looks good for Roger: typewrites, tape, rope, and an old barn. What could go wrong? 10 pages

Two Inches in Tomorrow’s Column (1965, shortstory) – 3/5
Benny is a shallow guy, and like a crab that lives in hole and hunts in the shallow water, he takes easy prey and lives on the water’s edge, metaphorically speaking. He’s been sleeping with a columnist recently so that it’ll pay off by her writing about his infamous boss’s new club. That same article came out the following day, so Benny prepared his parting break-up letter for the soon-to-be-stilted columnist. When she confronts him about his shallowness, she’s oh-so-cool… then he grabs on edition of her paper. 7 pages

Promises of Laughter (1969, shortstory) – 2/5
Both Denny Zucker and Holdie Karp have had successful writing careers in the sense that they both acknowledge each other’s talent and appreciate each other’s skill; however, Denny is one who pushes hard for his own work and feels it’s fair to push just as hard to find work for his woman. When his woman doesn’t take kindly to a hand-me-out, she tells a sob story of her rise to fame, after which Denny vents his frustration about being a suppressed chauvinist with right, damn it, rights! 9 pages

Ormond Always Pays His Bills (1957, shortstory) – 2/5
Hervery Ormond—of the well-connected Ormond Construction Company—has had the same dull yet productive secretary for six years. No one really questioned his choice, nor would anyone really question her disappearance after shooting her three times in her office. She had snooped in his office, found and forced open the locked cabinet, then discovered his less-than-honest dealing in concrete for the government. With knowledge of the poor concrete, so she becomes encased in the same concrete and cast aside. 6 pages

The Man on the Juice Wagon (1963, shortstory) – 2/5
Stopping at a circus and witnessing a girl being whipped, Harry Fischer takes action: He rescues the girl, gets in his rig loaded with nitro, and darts off while being chased by henchmen. When he jackknifes the truck in a tunnel to kill his pursuers, the hero and victim frolic in the hay, only later to discover that they are still being chased. The proceeding chase reveals the girl’s motivations, her relationship with her father, Harry’s connection to the same man, Harry’s own motivations, and his unwillingness to help the girl any further. 18 pages


Billy Landress is an author of moderate success who has just finished a full novel with less than a half the heart. He considers himself a pretty hot author and loathes the invitation to attend a “writers’ club” where dried up writers, so-called writers, and wanna-be writers fill the space between the walls, yet the space is void of talent, in Billy’s eyes. He shuns everyone but is intrigued by an old man who soon probes with deep questions and analysis. The brief conversation strikes him, but Billy’s unable to name or place the man as he has disappeared. 13 pages
Posted by 2theD at 7:23 PM 1 comment: