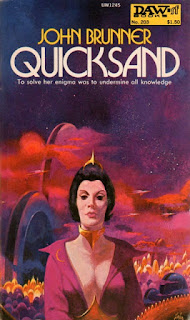 John Brunner does spaceships. John Brunner also does terraforming and alien sociology. Oh, by the way, John Brunner does vivid future history, generation ships, and psychology, too. Yea, he is sort of my hero when it comes to science fiction authors. Quicksand is my twenty-third Brunner book and once again, Brunner has showed me that the he has no limits; he is always reinventing himself, always breathing new life into old material, and always surprising me (90% of the time that is good, but he’s not perfect). Quicksand has psychological elements also found in The Whole Man (1964), but I think Brunner has done his homework and penned an intriguing novel, not merely for its pop psychology meanderings, but for its singular focus on the protagonist—Brunner turns the table on the observant protagonist by making him the whipping boy of his own regretful choices from the past and present.

Rear cover synopsis:
“She appeared in our world naked, defenseless, unable to say a word anyone could understand.

Her origin was at first simply a puzzle, then a scientific enigma, and finally a series of terrifying surmises that her most fascinated investigator was afraid to probe.

But probe he must, for somehow he know that this strange girl was a key to the kind of information science had sought for centuries. But the more he uncovered from the depths of her mind, the deeper became the quicksand into which his own was sinking.”

Paul Fidler is a psychiatric evaluator at a small asylum in England; his position in its internal rakings is blossoming, yet his depression mulls even his highest achievements. The dehumanizing bickering that his wife initiates mars their childless marriage; a perpetual air of hostility hangs over their home life yet even after she leaves him, the proceeding divorce adds another layer of failure onto Paul’s strata of depression. Objectively, Paul evaluates himself with a professional demeanor: “Humanity’s in the mind, in the tangle of thoughts spun by the brain, and once that’s gone what remains is human only in outward shape” (24).

Paul knows about the fragility of the human mind because he has had a breakdown once before and had been institutionalized. Though the specific reason for his breakdown is unnoted, Paul seems to struggle with his alter ego, a persona which manifests itself when his attention is turned away from his clinical observations.

Reflective of his dehumanizing home life, Paul is a humanistic healer at the asylum where he shuns the clinical detachment of “treating a patient as a thing instead of a person” (38). When one case of a young naked and feral woman reaches him, he situates himself at the mercy of her alluring mystery yet grudgingly resists her physical comfort. The woman, nicknamed Urchin, doesn’t speak English and even the professional examination of her written and spoken language is indecipherable. Her origins are unknown but she continually points to England on the map as her home. Her facial characteristics and ability to fight are indicators of a foreign origin, but no other signs point to a specific location.

His interest in the case causes staff and patients to gossip about his relationship with Urchin, one on the boundary of professional and personal. His with marriage gone and his friendships stagnant, only Urchin remained as his source of inspiration, as his impetus to change his future which seems to be spiraling out of control. With this fantasy comes his ideas of divergent histories, of parallel lives of different versions of himself where things are worse than they seem to be: “he had had that curious notion about another, somehow more real, version of Paul Fidler diverging from a moment of crisis down another and more disastrous life-line, so that what was to the alter ego real experience provoked these recurrent vivid imagination” (96-97).

Through her months in the asylum, her only place of shelter and learning, Urchin slowly develops her language abilities yet only finds comfort in Paul’s kind words and professional actions. With all her progress, she still exhibits seemingly irrational fears and sulking moments of personal pain. But through the technique of hypnotism come a few of Urchin’s revelations which meet Paul’s objective tact with indifference and disbelief. Paul is steeped in misery, feeling alone at work, at home, and alone beside himself—the history spun by Urchin is rich, captivating, and appeals to Paul’s idea of utopia. The more he understands about her unlikely past, the more Paul succumbs to the fantasy: “he might sink without trace in the quicksand of his troubles” (163). This is when Paul’s alter ego begins to seep through and immerse his daily life, his routine.

However, Paul maintains his humanistic healing even though his misery is rotting him from the inside out. He’s sympathetic with Urchin’s plight and understands her view as “the whole world as a prison” (132). Giving into an impulse to allow her a few extra freedoms away from the ward, Paul sets himself up to cut off from the past and make do with his present situation. He gives in to the romanticism of Urchin’s history realizing that she holds the key to his happiness… all this through his subjective rationalization.

Quicksand is written through Paul’s perspective, which may lend credence my “unreliable narrator” suspicions about the novel. There are many passages which the reader glimpses the internal thoughts of Paul, from his cold observations to his even more frigid self-pity. There is no outside reference to Paul’s world so the reader must rely solely on what is read to understand how Paul grapples with his downward-spiraling life. This is interesting for one reason and one reason only: it allows the reader to dichotomously read the novel with two trains of thought.

(1) The first train of thought regards Paul’s professional nature. He listens to Urchin but intrinsically disbelieves her and aims to benefit the appealing girl by disallowing her to speak of her fantastic history when others are around. If he can detach himself from his previous psychosis and remain objective in his investigation of Urchin’s history, then his ultimate fate lays in the realm of simply fatalism. He quits because he sees it as his only option.

(2) The second line of reason considers his past breakdown playing with his grasp on reality. Paul creates his utopia through the words of Urchin, he believes that a utopia exists and that she is able to lead him back to it. His alter ego manifests itself in the persona of his, possibly, imaginary friend Mirza, who is a noted womanizer. When his divorce is sure, his friendship with Mirza also begins to fail When Paul gets his chance to act through his once-reigned alter ego, his professional world ends and he chases the fantasy that subjectively exists.

There is much more to Urchin’s history than I am mentioning in this review. I think the less you know the better. Her history, as referred to above, is rich and utopian, which is either her reality or Paul’s imagination. In the closing pages of the novel, Paul once again confronts this reality/imagination and attempts to analyze it to its extremes. It may seem like another one of Brunner’s poor abrupt endings but Paul tries to subjectively rationalize Urchin’s history/his imagination. While dichotomously assuming both truths of Paul predicament, the conclusion is pure fatalism for either thread the reader follows.

The conclusion is a capstone of uneasiness; it is tragic for both Paul and Urchin whose relationship was based on an inaccessible utopia. It is difficult to establish who is more of a victim—Urchin, the naïve little woman from another time or place, or the flawed doctor who simply seeks solace after a series of unfortunate events. Like mutually assured destruction, the proximity of Paul and Urchin can only end in tears. This is Brunner’s most devastating novel and one that the reader must engage, which probably accounts for its devastating effect.
Posted by 2theD at 3:33 PM 1 comment: