Great cross-section of a talented man (4/5) 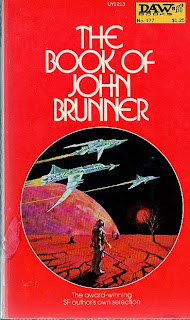 This hodgepodge collection of Brunner's, aptly titled, is dedicated “TO YOU and everyone else who reads my work. I always wanted to be a writer. But four you I've never have made it. Thanks” (5). And by hodgepodge, I mean there's a lot going on here—so many different facets of the man behind the novels and short fiction.

Within the mosaic of writing, the reader will find:

I had only known Brunner for his short fiction and novels... I had no idea he was well versed in so many areas including translations. I've read 27 of his novels and three of his collections... that's a pretty damn big cross-section of a prolific author, yet I've only caught a glimpse of the iceberg that is John Brunner.

While I love to read short fiction, the most interesting inclusion to this kaleidoscope of Brunner is his passing comments on a number of topic-related novels and short fiction that I've never come across:

I'm not one who enjoys reviewing crosswords, limericks, essays, songs, or poems... so I offer only six short reviews: four of the short stories (minus the excerpt), a French translation of a short story, and one of Brunner's poems which struck a cord in me.

“Bloodstream” (1974, novelette) – 3/5
There's a lot of history between Christopher Hill and William Bush, but that was ten years ago and in university. Chris has always envied Bill for his style, charm, and intelligence, but the same Bill he almost runs over in the middle of the street has fallen into disgrace. Unperturbed, Chris later meets Bill in his slum house where Bill launches a diatribe about human evolution and the city as an organism, all the while holding Chris captive by his own warped, internal logic. 18 pages

“Hide and Seek” (1973/1973, short story) – 4/5
Original: “Cache-cache” by Gerard Klein, translated by John Brunner
The often purported Theory of Everything has been rumored to exist in many places and faiths, but mathematicians and physicists know that it simply lies in the details. Most, however, feign from delving into exhaustive detail as it requires hundreds and thousands of pages and hours to describe details across multiple disciplines. Of course, that purported Theory of Everything is the existence of God, but where the details lie, does the devil lie within, too? 1 page

“Who Steals My Purse” (1973, novelette) – 4/5
Insults were directed toward the US by a southeast Asian nation and the President has announced that the American people won't stand for the accusations. Immediately, America is divided into the pro—those who seek direct resolution—and the con—those who urge pacifism. Barney is a TV political reported who is assigned to capture the mounting tension prior to the Senate's judgment in seven days. Meanwhile in southeast Asia, Cham Loc tends to his poor fields and family. 32 pages

“When Gabriel...” (1956, short story) – 4/5
Running and rounding a corner on their way to perform at a jazz concert, two musicians run into a shifty-looking miscreant  who, while upon leaving, gives a wrapped trumpet to the trumpeter. As he unwraps it, he sees it's the most beautiful trumpet of all, yet without make or serial number. Once at the concert, situated in a crypt, the man sticks to his regular trumpet, saving the elegant one for a jam afterwards. The notes blown are perfect, yet within the crypt, something has been called forth. 9 pages

“The New Thing” (1969, short story) – 4/5
More than 10,000 years ago, the human race created the Record Registry, a massive computer that's able to analyze every accomplishment bu every alien species that has ever existed in the universe. The creation of the Registry was a first amid the universe—it was also mankind's first and last Record of any sort. It was supposed to fuel ambition, but it has smothered progress. One man from Earth wishes to challenge three Records at once. 14 pages


John Brunner has long been a fierce opponent of nuclear weapons. He once wrote lyrics along the same lines for a protest song called “The H-Bombs' Thunder”, sung to the traditional music of “Life is Like a Mountain Railway”. Here, Brunner asks why we and our children should suffer from our leaders' choices. The same theme is found in this poem, but on a much more personal note: Why can the government instantly kill thousands of innocent people with a bomb, but one woman can't euthanize herself from the effects of the bomb? 2 pages
Posted by 2theD at 10:06 AM 1 comment: