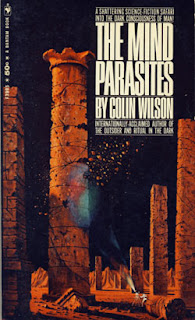 Colin Wilson is largely a non-fiction writer, penning books about mysticism, philosophy, and crime. Some elements of the uninspired, dry academic-type, non-fiction writing finds itself in the science fiction piece, The Mind Parasites. The sheer amount of pseudo-science, wild logic ending at wild conclusions, and very dated science makes some of the book hard to read. The reader has to suspend not only belief, but also suspend knowledge that Wilson wrote this book on reflection of his own believes on the matter... so it's a fictional book enshrouded by Wilson's pedantic tenacity.

Rear cover synopsis (Bantam, 1968):
"Power... that took one man to track its direction from the signs left by history... that has enslaved mankind from the beginning... that holds humanity from its birthright of total consciousness... that keeps each of us penned in a private prison of fear... that demands our extinction rather than surrender. What human dares defy the terrible power of The Mind Parasites."

Gilbert Austin is on-site at an excavation of some ruins which lay buried two miles under the Turkish soil. Prior to this, his fellow intellectual friend Karel had committed an unsuspecting suicide and left a seemingly rambling document about aliens plaguing the minds of humankind. Austin begins to find a truth in this and senses the malevolent forces of the mind-dwelling aliens himself. He then confides in another archaeologist/historian, Reich, who also experiences the demons in the depth. Together, they combine psycho-kinetic forces to battle with the beings while recruiting only the most intelligent, open-minded people on earth to train. Steadily amounting to nearly thirty people, who have trained to descend into their cerebral nebula, the Mind Parasites attack the weakest of the newly trained and kill them off one by one. It becomes obvious to Austin and Reich that an more subtle, reclusive, and thoughtful approach to the defeat of the Mind Parasites must be taken.

It's an excellent premise which is bolstered by the unique format of having no chapters at all in the 181 pages of the nearly pure narrative. The first ten pages is a solid transcription of a fictional tape recorded by the same Gilbert Austin and the remaining 170 pages are supplements from his autobiographical notes. This sort of "found footage" documentation in a novel is an interesting way to present a story, but it's typically laden with idiosyncratic spieling and impertinent details... much as the case of the first sixth of this novel: it's a pompously narrative, lengthy history of Egyptian, Hittian, Mayan, and Greek civilizations.

Beyond this first sixth, lays the remaining five-sixths, which is rich (in one sense) with detail, speculation, and extrapolation. As mentioned above, this novel is infused with Wilson's own speculation upon why mankind has morally declined and artistically failed since the year 1780 (when the Mind Parasites first clutched at humanity's collective cranium). It's nearly a diatribe because Wilson seems to be scolding humanity for being lazy minded, as if Wilson sees himself as an intellectual elite (this is further confirmed towards the end of the novel when it seems like Wilson is aiming for his "superiorly intellectual characters to government the world in a sort of technocracy). And it's also nearly a manifesto, although not political, calling on people to "awaken" to their internal senses.

Gilbert Wilson, amid the rambling passages and more-than-I-care-for details, actually does has a gift for constructing sentences which are imbued with his sense of greatness he's trying to write about: "The body is a mere wall between two infinities. Space extends to infinity outwards; the mind stretches to infinity inwards." (38) Some passages read like meditative epiphanies, others like quantitative analysis. Keep in mind that The Mind Parasites is a science fiction novel by a non-fiction author... whereby I whinge.

By 1967, a large collection of excellent science fiction had already existed (Brunner, van Vogt, James White, Alidss, and Anderson among my favorites); The Mind Parasite had to compete with other 1967 sci-fi novels including John Brunner's Born under Mars, Brian Alidss' Cryptozoic!, and Kenneth Bulmer's Behold the Stars. While the speculation in The Mind Parasites was the main draw, the speculative science portions of the book are irksome: rocket plane, neutron dater, electro-comparison machine, moon rocket, and cosmic ray gun. Then there are the words which must have been inspired by Asmimov's atomic-heavy Foundation: atomic blaster, atom gun, atomic missile, atomic war, and atomic pistol (no peaceful uses of the atomic washing machine are to be found).

There are scientific errors abound regrading the moon, Venus, and Mercury but the trespasses are forgivable given the publication date. If you suspend your knowledge of science and stomach a hearty portion of an author's diatribe/manifesto in a science fiction context, then you'll find The Mind Parasites to be a unique read. As for more fictional Colin Wilson novels, I'll be taking my chances with other authors lining my bookshelves. The Mind Parasites is a keeper, but with much reservation about reading it again any time soon.
Posted by 2theD at 10:24 AM