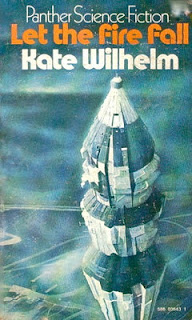 Kate Wilhelm's Where Late The Sweet Birds Sang was the first novel I've read by the author. While considered science fiction, it didn't use the science as a a focus or as a crutch, but more as a tool for the plot. The same could be said for Let the Fire Fall. The inclusion of an alien in the plot isn't for the sake of using it for science fiction, but merely for the use of a tool in the plot, as a way to incite a drastic change in society.

Rear cover synopsis:
"The alien starship landed in a cornfield. Its crew died rapidly, leaving only one survivor - a baby, conceived on an unknown world, carried in its mothers womb across space and delivered even as the mother died on a hostile Earth. But the alien woman had given birth to more than a child. With her last act she bequeathed to the Earth that hated her and her kind decades of turmoil and strife that would come close to tearing the whole planet apart..."

After the spaceship lands and the crew begin to die, one particularly immoral young man, Obie, decides to base a religion on the hatred of the strangers. This same young man is the illegitimate father of a child to be born the same day in the same house as the alien baby (the mother jettisons away from the virulent craft to the doctor's house, where he tends to both mothers' needs). With society's fear of the plagued aliens rampant, Obie finds a toehold for his ersatz faith and declares himself a prophet of God.

The chapter passages tend to shift time periods and character POV in abutting paragraphs, making it jarring to follow coherently. And as Obie's religion spreads across the country over two decades, the span of time becomes important as to the development of the human child and the development of the Star Child, of whom Obie seeks to proselytize his farcical faith for him. The span of characters is manageable but the initial chapters are a tad confusing with the inclusion of nearly all the key players.

The plot was fairly predictable and many of the twists of plot were a tad absurd (the Star Child's private submarine and private helicopter). Wilhelm even effectively kills off a major character (the obstetrician of the same-day babies) by putting him into cryo-sleep and metaphorically dusts off her hands for that snag in the plot. Those two instances are just samples of some of the things Wilhelm tosses into the mix in order to create an artificial change in the plot. It doesn't flow naturally.

Besides the irksome plot flow and paragraph flow, the premise is interesting at least and the books remains fairly readable though I wouldn't want to reread it. The fanatical xenophobic change in society when the aliens arrive is probably all too real. When the same xenophobes begin to turn against the human non-believers... again, it feels all too real. So, Wilhelm gets points for what I feel could be an accurate portrayal of first alien contact on earth. Definitely read Where Late The Sweet Birds Sang, but skip Let the Fire Fall.
Posted by 2theD at 10:38 AM