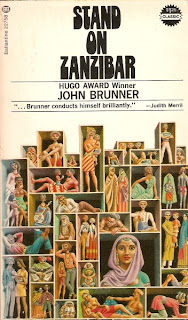 My 11th Brunner novel to-date and also one of my favorite Brunner novels because of its unique composition, epic subject matter and plot continuity. If you're like me, I love to dive head first into a novel without researching it, without reading the synopsis. In most cases, I'm wowed by nearly any novel's content simply on the basis that I'm surprised. But perhaps I should have braced myself for what lay in Zanzibar. I took it with me on a trans-Pacific flight, hoping that the sheer thickness of the novel would keep me attentive but the first fifty pages were so scatter-brained that I put it down and only picked it up again ten days later when I took the same flight back home... and still, it seemed scatter-brained. Only about one-third into the novel did I begin to feel comfortable with the composition.

Rear cover synopsis:
"This is a giant of a book, in many senses of the word. It had to be, to give elbow-room for its subject matter. There are seven billion-plus of our species crowding the surface of the twenty-first century Earth in an age of acceleratubes, Moonbase Zero, intelligent computers, mass marketed psycheddelics, politics by assassination, scientists who burn incense to appease volcanoes--hive-living hysteria that is reaching its bursting point all over the world. But a hive seldom knows about its madness until it's too late. Employing a dazzling range of literary techniques, John Brunner has created a future world as real as this morning's paper--moving, sensory, impressionistic, as jagged as the times it portrays. This book is a real mind-stretcher--yet beautifully orchestrated to give a vivid picture of the whole. Read it with care--move in with it--this may be where we're headed..."

Divvied up into four parts, each gives the reader a glimpse into the world Brunner has created:

The meat of the novel lays in "Continuity" where the two plot lines of Norman (headed for Beninia to establish a new economy) and Donald (headed to Yatagang under subterfuge) start as one and eventually split into the two said strands. Beginning as roommates, we're introduced to the lifestyles of their generation, the living conditions, the language, etc. This alone provides a detailed picture of the year 2010 where earth is being over-populated.

The second most important of the quartet is "Tracking with Close-ups" where the reader can catch glimpses of everyday life for a smattering of humans on earth: witness their decadence, see their plights and perils, come to understand the one drop in the ocean of flesh. These slices of life are more like short stories based in the Zanzibar world, each as minor as the next but like a flood, the torrent is composed of many small water droplets.

One less interesting aspect of Zanizbar is the inclusion of "Context" which highlights social troubles via the written works or spoken word of an author in the novel by the name of Mulligan (or sometime snippets of other conversations, songs and such fluff). Sometimes insightful, usually wordy and preachy but the best bits lay in "Hipcrime Vocab" where Brunner shows his mastery of wit and language akin to a modern-day Devil's Dictionary... all interesting, but not essential to the 650-page novel.

Lastly, there comes "The Happening World" where the novel should NOT have started the novel and which, really, added nothing at all to the overall picture. It's like stream-of-consciousness writing with no connectivity, no basis, no logic. No, thank you.

Even if I hate a book, I still read it cover-to-cover. But with Zanzibar, I found myself skipping much of the peripheral "Context" bits and nearly all of the obscure "Happening" sections. These two lines of page additions distracted me from the greater whole of the core plot: that of Donald and Norman in the context of an over-populated world and where one man, especially a changed man, can make a difference and how science, too, can push society one way (to greatness) or the other (off the cliff).