Loaded with intent but lost in the mix (3/5) 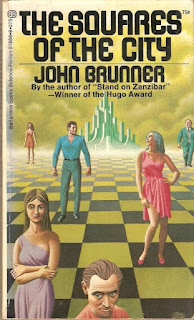 Ah, my monumental twentieth Brunner novel! I've been back and forth through his bibliography from the 1950s to the 1990s and through the thick and thin of his science fiction conquest. With his novels and collections gather together, I've barely touched a third of his complete work. As he is my favorite author, this gives me much joy to delve into any new Brunner book. When I drew The Squares of the City from my "to-read" list, I was eager to bite into it. I didn't research the book prior to reading it because, as with most books, I enjoy being surprised by the unfolding of everything within. Little did I know that this book is Brunner's most un-sci-fi-like... it's doesn't even border on sci-fi like The Wrong End of Time or butt up against th ledger of fantasy like Traveller in Black. Though it was a 1966 Hugo nominee for best novel, this is full-frontal fiction with a unique concept:


The persons, places, and events described in The Squares of the City are, of course, entirely imaginary. [...] The game of chess itself it not imaginary at all. It is Steinitz-Tchigorin (Havana) 1892, precisely as recored on the Penguin handbook The Game of Chess by H. Golombek. Every move of the game has a counterpart in the action of the story, with the partial exception that castling is implied and not overt. The individuals who correspond to the "pieces" have powers roughly commensurate with those of the pawns and officers they represent. (316)

Unique it may be, but it makes for a rather dull novel even though the introduction states that "[...] even the reader who knows nothing about the game will be thoroughly fascinated by this story." (7)

Rear cover synopsis:
"THE SQUARES OF THE CITY is a tour-de-force, a disciplined conflict peopled originally by wooden or ivory or jade figurines, now fleshed and clothed and given dramatic life in a battle as old as the classic contest of chess.
Except that these are real people. When heads roll, blood gouts and drenches the remaining players while they watch in horrified fascination--knowing their own turn will come."

Boyd Hakluyt is traffic engineer whose expertise is sought after across the globe. His most recent contract has him flying the fiction Latin American country of Aguazul and more specifically to the capital city of Ciudad de Vados, a city envisioned and built by the man the city is named after--Vados. Being "the most governed city in the world", the need for control is great, as said by the author who inspired the man to build the city:


Conformism is a slow death; anarchy is a rapid one. Between the two lies a control which [...] like a lady's corset is an advertisment, constricts and yet bestows a sense of freedom. We govern our country with a precision that would amaze you. (84-85)

It's not only the political forces which constrain the freedom of the people, but it's also the media which sends messages askew, be it pro-government or anti-government; both sides are part of the same goverment agenda. Subliminal messages are embedded in state-run television to alter the opinions of the views, but only a select few in the know have scrubbers to clean the signal of its propaganda.

Boyd sees himself outside the need to be involved in the workings of the government and their propaganda, but he also becomes unwillingly embroiled in the deeper crevices of pro- and anti-government camps. Simply wanting to do the job that was offered to him, Boyd struggles to find a perfectly suit traffic plan which suits an already perfectly engineered traffic system. However, "the politcal atmosphere [...] was of the hothouse kind. The least incident capable of being made to bear fruit was being nurtured, protected from frost and fed with manure until it blossomed out of all proportion." (131) He couldn't please everyone, but he could darn well try.

The microcosm of effervescing political turmoil in Ciudad de Vados allows for characters to continually pop up from the trembling surface of the plot. The first first half of he book is laden with too many characters--nearly as many in the plot as there are on a chessboard. Only when they pieces begin to be taken (read: when the players begin to be killed) do things somewhat solidify and the opposition becomes clearer: "It is a matter of combination. Each move must be seen in relation to the whole. And this applies also in real life." (172) It's a taxing read, something I had to pick up and put down after reading only ten pages. The two-star material was simply an vast expanse of character whac-a-mole, each mole just waiting to get slammed back into its arcade machine of a metropolitan.

If the reader didn't know that the entire book was based on a chess match, the revelation wouldn't have been made clear until the very end when the connection with chess is made clear--clear in the conclusion context and in the "author's note". Inventive, clever, and brilliant? I don't know about brilliant but it WAS beat of the Hugo by Frank Herbert's Dune (and Zelazny's ...And Call Me Conrad). It might have been clever and all but the actuality of the process in book form is not at all interesting to read.

Because it's not really a science fiction novel, it's outside of my realm of expertise but two things did have me scratching my head: (a) Brunner mentions "[...] the finest analogue computers in the world couldn't get all the bugs out of a traffic plan" (13) which sounds terribly dated for such a forward-thinking author, and (b) he offers up a paradoxical simile with "an organic vitality akin to that of a giant machine." (15)

So, while the first half is a tedious whac-a-mole job of fitting everyone into their respective camps, the second half offers up some steam-driven action. The conclusion isn't easy to arrive it but once there, it makes sense and offers up a "mmm" or "ahh" or "ooh" or a random velar fricative from the reader (choose your own interjection, depending on whether you like chess or not). A definite read for a Brunner fan or chess fan, but otherwise I'd really leave this one alone. Three-stars it may be but this one is headed for the second-hand bookstore.
Posted by 2theD at 2:16 PM