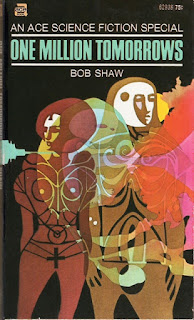 My earlier readings of Bob Shaw revealed a writer of two skill sets: one with a carefree ease of penning a simple novel (Vertigo [1978]) and another penning a novel with solid impact (Ground Zero Man [1971]). Both of these novels shared one common theme: Shaw’s gift for emitting humanization through the characters’ plight. It’s this human element which I wanted to return to in Bob Shaw’s writing.

Rear cover synopsis:
“In the 22nd Century, no one had to die of old age: an immortality drug was available to all. Its only drawback was the side-effect that ended a man’s sex drive, so most men waited till their youth was fading before they took the final step and became ‘cools.’

But Will Carewe became the first man to test a new variety of the drug, one without any side-effect at all. The limitless future, a million tomorrows, stretched before him with golden hope… until a series of ‘accidents’ made him realize that someone was trying to murder him.

As an immortal Carewe had an infinitely greater stake in remaining alive. So he began the battle to find out who was after him, and why…”

Uneasy with the sudden focus on him, Will Carewe, a lowly accountant for the company who manufacturers the ubiquitous immortality drug, is unsure why he was called to the company president’s chambers. Proud of his work for Farma incorporated and swallowing a cocktail of anti-handover pills, Will approaches the office with reluctance and foreboding. Will’s common sense earns him the attention of the president for a drug trial which allows him to become immortal and maintain the “benefits.”

When men take the common immortality drug, their loins which had once burnt with passion become impassive and flaccid, a sexual void which many wives find a way around. Therefore, many of the men who eventually take the immortality drug do so after their life’s prime state, but Will is over 40 now and unwilling to take the plunge to become a “cool”, a term used for a man who has undergone immortality and lacks the fire in his loins. With the promise of keeping his libido, Will accepts the new and improved immortality drug.

During his honeymoon, Will injects himself with the immortality drug thereby “tying off” at his present age but still able to produce a few thrusts before he “cools”… and so he does, much to his wife’s enjoyment. However, not everything is perfect in the Carewe household—soon after the honeymoon, his wife admits she’s pregnant, but seeded by another man’s passion. His anger drives him away from his wife and away from his accountant work; he decides to voluntary leave from his position to African continent. His work, he soon discovers, involves demoralizing the Malawi natives and forcing immortality/sterilization upon them. His stomach isn’t weakened by the deed, but his immortality is being tested by actions to take his life.

Chased by “random” accidents and eager to make up to his wife, his perilous life becomes more complicated when he discovers his wife is missing—presumed kidnapped. With the assistance of Farma Incorporated and their hired detective, the two track down the location of his wife and her captors, though a slippery notion plagues Will’s instincts in the frictionless ball-bearing factory. Who would want him dead and what do they want with his wife?

“Who would want him dead and what do they want with his wife?” – that’s the tiny mystery behind the otherwise wonderful plot with social and ethical considerations abound. Rather than take the high road and explore these facets of immortality and sterility, Bob Shaw takes the low road and takes the reader through chase scenes and man-on-man fist fights. What “could have been” was boiled down to “what it wasn’t meant to be”, but this reader wasn’t too terribly disappointed.

Shaw mentions time and again the “cooling” effect of the immortality drug. He also goes further into the martial affection of this “cooling” – if the women aren’t serviced by their man, where can they go to slake their libidinous passions? There are further ethical dilemmas: Is immortality a basic human right? Should immortality be forced upon the unwilling? These are intriguing humane questions to consider, but this remains the only human element in One Million Tomorrows. As Joachim has said, the pot-boiler in the last entire half of the novel drags down some (though not a majority) of the wonderment experienced in the initial half.

As mentioned in the introduction, the novels Vertigo and Ground Zero Man have distinct differences. Among those differences is the prose Shaw has penned. Ground Zero Man had elegant sections with vivid descriptions while Vertigo was largely stale in flowery language. One Million Tomorrows is reminiscent of the insightful language and flowery depictions. Aside from the tiresome attempts on Will’s life, the world around Will is rich with detail: private transportation in “bullets” (with futuristic carphones) via pneumatic cross-country tubes, household appliances with domed abodes housing self-chilling glasses, and industrial Idaho producing frictionless ball-bearing (and the hazards such an invention poses).

Class the above as retro-futuristic uninhibited reverse peristalsis or eager-to-meet-the-future-with-wide-eyes optimism, but I’m a sucker for it all. I love the romanticism of glorifying the future’s luxuriousness and inventiveness; the more uninhibited and the more exotic, the better. Perhaps this is why I rate the novel a 4 rather than Joachim’s 3. I can look past the pot-boiler plot filler and weak ending for guilty pleasure found in futuristic potential and gadgetry.

My third book by Bow Shaw and he yet he still manages to show another facet to his middling talent; good, not great, with some decent imagery and romanticism, but failing to tie everything together into one wholesome package. The perfect Shaw hasn’t been found, but two more line my shelves (Fire Pattern [1984] and Orbitsville [1975]) and others await my lustful sci-fi eye.
Posted by 2theD at 11:09 AM