The elderly reluctantly inherit the earth (5/5) 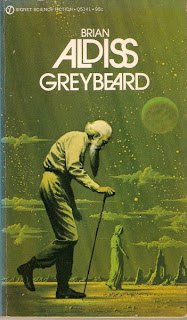 Brian Aldiss seems to have a limited following with the wider science fiction community only recognizing Non-Stop (excellent!), Long Afternoon Of Earth (great!), and Helliconia Spring (haven't read it yet) as his landmark novels. I've read five of his novels and each one has been a 4- or 5-star rating, among them Starswarm, Cryptozoic, and Earthworks. Each one of these books highlights Brian Aldiss's masterful gift for creating a setting which is detailed and absorbing. Greybeard is no different - it opens your eyes and keeps them glued to the pages.

Rear cover synopsis:
"After the Accident, the Dark Ages return to Earth. By the year 2029 A.D. few survivors remain. Those who are left huddle in isolated villages, prisoners of fear, superstition, and old age. The rare man who still wants to shape his own destiny must strike out into the unknown. Greybeard is the story of such a man and his wife - of their perilous journey through a landscape weirdly familiar, eerily changed. And of their quest for something they dare not name..."

Algy Timberlane and his wife Martha met during childhood, in the the early years after the Accident in 1981. Both aged seven years old and both recovering from radiation-related illnesses, they will discover that their lives will be intermeshed through the world war in 2001, through the cholera outbreak in 2018, and through the reclusive years after the sequential disasters in 2029. The Big Accident having wiped out most large mammals and rendering nearly all of humanity sterile, only weasels, reindeer, beavers, otters, and coypu are left to either eat or provide some sort of utility to the remaining humans dotting the English countryside... while "the mammal with the big brain eked out his dotage in small communities." (71) With an average age of seventy and where 50 years of age is considered to be young, the hope for the future is dim: "Mortal flesh now wore only the Gothic shapes of age. Death stood impatiently over the land, waiting to count his last few pilgrims." (39)

Algy Timberlane (aka Greybeard), now aged 54 in the year 2029, started to work for DOUCH(E) during the war in 2001. DOUCH(E) stands for Documentation of Universal Contemporary History (England) and Algy's job is to simply place himself where history is being made and make recordings of history unfolding: "...someone should leave behind a summary of earth's decline, if only for visiting archeologists from other possible worlds." (83) His wife Martha is at his side when they decide to escape their community as it experiences a surge of unrest. Fleeing the hermetic village with the couple is the chaplain, Charley, five years Algy's senior, who provides optimistic countenance to Algy's own spiral of negativity. Also, the trapper and somewhat dim-witted Jeff Pitt is along for the perilous journey, who has been Algy's peripheral sidekick since the days of training with DOUCH when Jeff was ordered to assassinate Algy.

The seven chapters of Greybeard alternate between the escape from the village and downstream journey to the shore in the years 2029-2031 with that of historical background of the (1) year 1982 when the year after the "fatal bombs in space") and we reader witnesses a key event in Algy's life: his chance encounter with the hairless girl next door and the suicide of his father. (2) In the years 2000-2001 Algy receives training with DOUCH and experiences a unfortunate event which solidifies the bond between the Algy and his fiancé. (3) In the year 2018, cholera began to take it toll and escape from the dictatorial urban center was the only choice in order to survive.

Like all the other Aldiss novels I've read, the author pens a richly detailed novel interspersed with cavernous emotion, inspiring allegories, and romantic prose: "Year by year, as the living died, the empty rooms about him would multiply, like the cells of a giant hive that no bees visited, until they filled the world. The time would come when he would be a monster, alone in the rooms, in the tracks of his search, in the labyrinth of his hollow footsteps." (129) The reader will certainly get a feel for the desolation of the bucolic English countryside in contrast to the effervescent hope which bubbles from unknown emotional depths. Aldiss peppers Greybeard with fun little words like "sedgey" and "cavil" and "pundit" with some interesting formal words like "metoposcopy" and "katabatic winds" and "catenary" and then there's always the rare long words you come across once a year like "peregrination" and "tatterdemalion".

Greybeard may not be the best place to start when tackling the Aldiss bibliography, but it's certainly a prized mantelpiece for post-apocalyptic fiction, once which infuses barrenness with hope, self-destruction with mollification, and fatalism with transcendence.
Posted by 2theD at 1:01 PM