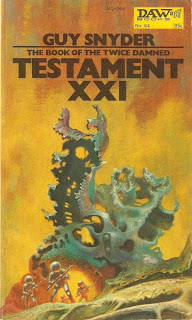 Guy Snyder's Testament XXI: The Book of the Twice Damned (DAW #64) is a total one-off; this author never wrote another novel, novelette or even short story, according to ISFDB. The rear cover also adds, "...a novel quite unlike any you have ever read in modern science fiction." This is true. It's... unique. Hmph.


Rear cover synopsis:
"When Astronaut Williamson returned after the longest flight ever made he found that the great civilization that had launched him was gone... destroyed in a chaos of its own creation. But somewheres in what had once been Michigan the Republic welcomed him back. The Republic that was a kingdom, the Republic that consisted of one underground city ruled by a weakling monarch and a power-hungry priesthood."

Returning from a mission to Bernard's Star, our lone astronaut, James, has left his crewmates in the mothership in a decaying orbit around earth. Crashing his craft, James is accepted into the underground colony of Detroit. With a military background, he is quickly trained to rise to the ranks of defense commander. His novelty has him in close proximity to the ailing king who uses him to spy on his nearly-psychotic prince son, Richard. The relationship between James and Richard matures as the king passes away and Richard assumes responsibility for the livelihood of the colony. At the same time, the powerful Archbishop makes a powerplay against the rising star, James. A secret stash of 2011 bibles contrasts the current 2111 bible, which James says is a crook. Branded for treason, the Archbishop puts him on trail but is saved by the heir apparent. Add to this conundrum the recent deflection of an 80-megaton nuclear bomb and a successful scouting mission to the colony of Chicago, and circumstances begin to align themselves.

Pretty decent synopsis, which is much easier to read than the actual novel. The chapter passages are oddly separated one-line sentences beginning and ending with notational ellipses. Sometimes this spacing fills nearly an entire page. Some of the dialogue, too, is spaced in this fashion, as if the editor is trying to bulk up an otherwise rather thin novel (which could be easily read in 2-3 hours). Four of the seventeen chapters begins with a perspective from an animal living on the surface above the colony: a lizard, a buzzard, a kangaroo rat and a rat. These four passages last for 2-3 pages and add a certain charm to the book. It's unique, but has nothing whatsoever to do with the plot.

Snyder's writing style, besides the repetitive notational ellipses, is bipolar. Most of the time the writing is very straight forward but there are also glimpses of wonderful insight:
"What causes men to become no more than celestial chess players?"
"War's a game, my lord."
"That's a trite, lousy explanation of the phenomenon."
"That's because the phenomenon itself it trite." (93)

And other times he is tirelessly wordy with obscure descriptions: "The fuel was called, noncommercially, Grade #3H. It was, of course, the right kind of fuel for this type of VL-VTO craft, series R12-56." (100)

It's not an easy read because you have to understand the constantly shifting viewpoints from pilots, animals, James and the Archbishop. There is even shifting viewpoints of characters who have an entire chapter dedicated to them but play no role in the plot, such as "this particular man" in Chapter 9 who is described while going to work, doing nothing and finally witnessing the war production line begin, much to his dismay.

Unique, it is- the synopsis was right for a change! It think I'll keep this book on my shelves for sheer novelty. It's a little fun, actually. She's a keeper.
Posted by 2theD at 4:22 PM