The meddling of a thespian; the conspiracy of the playwright (4/5) 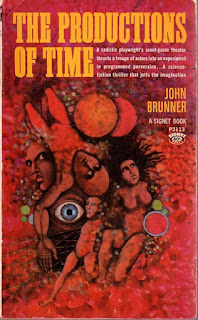 You’d figure… after reading twenty books of a single author, you may become bored with the author’s prose, ideas, or reoccurring themes. Every time I pick up another Brunner novel, I open the pages expecting it fall between one or another of his novels—one with parallelism or atmosphere. Even his bad books (The Wrong End of Time [1971] and Give Warning to the World [1974]) maintain an intrinsic originality, yet flawed in its pulp delivery or flat plot pulse. This here is my twenty-first Brunner, a novel which I knew not to be the hardest of his science fiction nor one of his more renowned novels. The fact that’s it not well-known urges me on—I read it in one day. To say I relished it would be a stretch, but to say I found it intriguing would hit the nail on the head.

With each discovery, Murray Douglas’ alarm grows. But it doesn’t seem to affect the others.

It’s just Delgado’s way, they say. He’s an oddball genius who has concocted his own method of writing and directing a play. All we want is an opportunity to act for him.

But Murray Douglas wants to know why Manuel Delgado has searches the stages of the world for these particular actors. Why has he isolated them in an unused country club and played to their weaknesses? Why are they being proctored by the odd, silent servants? Who is Manuel Delgado and what’s his game?

Little do the actors realize that the play is not the thing. That it is barely a cover for one of the most astonishing and surreal events ever to unfold. That they are puppets of a master intellect… pawns in the productions of time.”

Murray Douglas has spent some time in the sanatorium while recovering from alcoholism. Once a well-known actor, the now has-been is trying to recoup his losses by signing onto a play with a playwright of recent infamy. The playwright, Manuel Delgado, staged a play where the one actress admitted herself to a psychiatric ward, one actor committed suicide, and another woman ate her baby. Had the production been doomed from the start or had the dastardly result been Delgado’s intended goal?

When Murray arrives at the remote English estate, he is escorted to his room where he discovers a wet bar. Angered by the ignorance of his hosts, he demands the liquor to withdrawn from his room but later finds an half-empty bottle of whiskey in his medicine cabinet and a open bottle of Scotch in his suitcase, a bottle he didn’t pack. Smashing the bottles in the tiled bathroom, Murray confronts the director of the play, Mr. Blizzard. Blizzard pleads ignorance in the matter, so Murray turns to the other actors housed in the estate. They know him for his alcohol problems and the scent of booze emanating from his room confirm their suspicions.

Murray’s dislike for Delgado and Blizzard is heightened when he then discovers metallic gossamer woven into this mattress which is attached to a reel-to-reel machine in the bed’s frame. Without a speaker, the set-up isn’t meant for nocturnal lullabies and the lack of a microphone discredits the rig as an audio recording device. When Murray confronts the playwright and the director, they, again, seem to feign ignorance and blame the matter on the estate’s history as a country club. Unperturbed, Murray tells others of his finding, some of who are alarmed at the invasion of privacy.

Murray is trusted by two other members of the thespian troupe: a man with a heroine fix who finds copious amounts of “horse” in his room but trusts Murray to dose it out to him, otherwise he may double-dose himself to death; the other is a pretty girl without vice or reputation. This girl’s normalcy contrasts the rest of the thespians who have reputations of lesbianism, pornography, or pedophilia. Add to this his alcoholism recovery and his friend’s addiction; the result is a decadent mix of vices which no one could possibly want to organize together to perform a play of any sort. What ideas had Delgado formed to compose the group as such?

Murray’s infernal meddling in the estates electronics angers Delgado and the estate’s butler, Valentine. The odd console has continuous power even when the set it turned off; the power cord isn’t plugged into the wall but runs into the adjoining room. When Murray tugs the cord, a crash occurs and Valentine runs to the other room to attend to the resulting crash. Again, Murray is scolded but he continues his effort to persuade the other’s of the odd happenings in the estate. He’s committed to production because of his need to return to acting, but when circumstances become unbearable, Murray reflectively threatens his immediate departure but his curiosity gets the best of him. When he overhears, “That wasn’t the experience contracted for!” (106), Murray organizes a quick set-up of his own to wring the truth from the conspirators.

The commonplace, non-SF setting with an actor as the protagonists was a tad unsettling. I wasn’t sure what to expect as I tend to ignore reading synopses before reading the book, but I maintain faith in Brunner (rarely has he failed me, but I once damned him for writing the novella “No Other Gods But Me” [1966] in his Entry toElsewhen [1975] collection). Thanks be to Brunner that he had talent enough to carry the reader through some good amount of deception, chicanery, and good old-fashioned lying to rile up the protagonist. Murray’s inquisitive nature spoils the fun of the conspirators, though he has little idea who exactly they are or what exactly they are up to; Murray just knows that he doesn’t appreciate being played with and lied to. This amounts to a good amount of frustration resulting in petty destruction, something which the reader can empathize with.

The cast are scripted to be have “been brought to ruin and disrepute by abnormal behavior” (1) but I found them all to be interesting and was rooting for their latent revolt against those conspiring and lying, whoever they turned out to be. They may be “down-and-out actors” (1) with some inhibition to resist revolt because they also need the acting job, but the reader actually puts a measurable amount of faith in Murray to continue his antics and get to the root of the meddling mystery. It’s fun… something which is hard to say of other Brunner books which typically waver between intellectually satisfying and curiosity stroking.

The inclination to the climax is steady, with the climax itself being very abrupt and fruitful. It snapped like a taught elastic band and stung like a being smarted by the same elastic band. The conclusion to the mystery is a bit grandiose and far-fetched, but don’t read any more of the page one synopsis (in the Signet edition) if you don’t want any inkling as to what that conclusion rests upon. Maybe since I read all 139 pages in one day, I found the conclusion suiting, even with its ‘deus ex machina’ quality (a lá The Wrong End of Time).

The Productions of Time may not be Brunner’s most challenging book or more intellectually satisfying book yet, but it’s one of his most fun reads. Be open to Murray as you are to the unique cast, and you may be open enough for the ‘deus ex machina’ conclusion. Simple and charming… I’m wondering if Timescoop (1969) holds a similar appeal.
Posted by 2theD at 4:53 PM