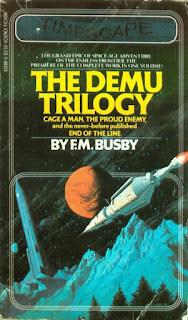 My original reason for seeking out and procuring this Busby trilogy (three novels: Cage a Man [1973], The Proud Enemy [1975], and End of the Line [1980]), like many of the purchases, had been forgotten. Trusting my earlier self for writing the name of the book down, I bought with a shrug and swore to my earlier self that this had better be good. And good it was not. If this is Busby's best, the chaff must be gag-worthy.

The Demu have laid plans to conquer the galaxy. And to transform all its inhabitants!

Barton has to stop them. But, threatening as the Demu are, Barton discovers an even more dread fact--the Demu are only the seed of an even more ominous alien master race.

In a universe peopled with single-minded aliens, star-traveling Tilari, Terran slaves, despotic space-fleet commanders--and Limila, a most unusual heroine--Barton never gives up. Against insuperable odds and formidable foes, he fights to the finish, flying to the far-reaching frontiers of space and back again, plumbing the secrets of alien races!"

Busby has a good thing going (a great thing actually) when he wrote the first 45 pages of this trilogy. A mini-synopsis would go something like: "After awaking, Barton finds himself imprisoned with strangers of human and alien. Later, being in solitary confinement, Barton plays mind games with the mysterious aliens who hold him captive." This alone was a great story, albeit short. It had all the great nuances which evoke concentration to the reading, absorption in the plot and a yearning for the conclusion...

...THEN Barton introduces Earth into the plot, where the politicians, scientists and military analysts are all plotting around getting back at the Demu race, who have kidnapped humans and tortured them in their experiments. Here is where the plot loses all steam as page after page is full of planning, more planning and a countdown until the plan is unleashed. All the while, Barton's sex toy of an alien is getting plastic surgery so that they can commence their horizontal frolicking.

When the Earth-made ships are off into space and arrive at friendly alien planet, a party is thrown where humans and aliens alike scamper off to bed each other. Once all the gear is aboard, the ships set off, more eye-rolling frolicking continues and finally the ships reach the Demu planet where their ultimate plan is set aside for a better alternative- all with a terribly predictable ending.

Reminiscent of Busby's other novels that I've read reviews of, the author throws sex scenes around so casually it seriously distracts from the plot, which had little to hold my attention anyway. Perhaps if I were a 12 year old boy, my attention would have been undivided but for a non-stop science fiction reader like me, the plot is flat after page 150.

One other reviewer said it was a love story, too. If you consider someone shallow like Barton who urges his sexpot to change herself physically through surgery after surgery to make her look more appealing and sexually functional... and you think that's love, then yes, it's a love story. How romantic.


My 45 page love affair with Busby was shot down with the resulting 480 pages. How sweet romance the first 10% of the book was, then my eyes were raped with terrible prose, a cliché plot, and bountiful, peripheral sex scenes with aliens. Why, why, why was it so bad?
Posted by 2theD at 7:10 PM