Struggles to find a toehold or point of advance (2/5) 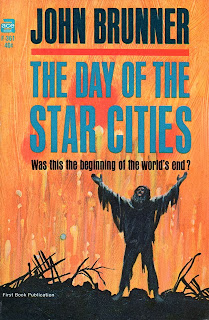 The year 1965 was a busy year for John Brunner; he published seven novels: five with Ace (The Altar of Asconel, The Repairmen of Cyclops, The Martian Sphinx, Enigma from Tantalus, and The Day of the Star Cities), one with Ballantine (The Squares of the City), and one with Faber & Faber (The Long Result). However, unlike many other Brunner novels, this novel was neither serialized nor stitched-up. One might assume that this would make the novel more coherent, more focused… yet, one would be incorrect in that assumption. The Day of the Star Cities fails to find its voice amid the characters’ conjecturing, flaccid hypnotic slant, and hollowness of the aliens’ intentions.

The Day of the Star Cities has an alternative title of Age of Miracles (1973), but this is a revised edition and, by simply looking at the page count, a substantially longer book—158 pages and 300 pages, respectively.

Rear cover synopsis:
“The first hint that Earthmen had that aliens had come to their planet was a catastrophic one. Suddenly, without warning, all the atomic weapons and fissionable material on Earth were blown up. Panic, death and chaos reigned for months before things began to get back under control.

By that time reports were already coming in of five mysterious star-shaped cities scattered over the globe—huge area [sic] of flickering light and awesome free energy, disorganizing to human senses and impregnable to attack. The aliens had built their bases on Earth.

But were they only bases, or—something else?”

Though called “cities” by the helpless natives of Earth, the actual purpose of the towering translucent structures is unknown, yet some hold a theory that, rather than housing alien intelligences, the “cities” are actually the nodal points of an alien interstellar transportation system. The five “cities”—located in Russia, Brazil, America, Australia, and Antarctica—are each shaped like a star and are also arranged in array, a fact which leads credence to the transportation theory.

Humans are barred from entry by subjection to permanent delirium; those who have entered and returned are called “crazies” yet rumor has it that a Russian child possesses the ability of entering the city and returned unscathed. Members of a resistance group in opposition to the militant dictators kidnap the boy and aim for the western American coast, where they happen upon rescue by American sympathizers.

In America, too, there is rumor of one child’s ability to enter the city and return with a glowing artifact. These live artifacts are very rare as most of the detritus surrounding each city is dead, inoperable and without notable function; the American separatist state of Grady’s Ground was founded on the trade of these artifacts and Grady himself is very eager to collect functioning pieces of alien technology. However, other people, as equally as unscrupulous as Grady himself, are also after the artifacts which could bring huge amounts of money and, thence, power. In an era where the governmental reach has collapsed, holding power is greatly beneficial to survival, expansion, and control.

Dennis Radcliffe is once such swarthy peddler. In a bar, casually having a beer like any man, a crazy materializes in the bar and assaults Den screaming “Damn you … you did this to me, you bastard” (6). Never having seen the man before, Den is perplexed by the accusations and, as any man would have, defends himself against the crazed man, killing him. Sheriff Waldron questions Den, without much success, and attempts to solve the mystery of the crazy, whose innards are laterally swapped and whose face is exactly similar to Corey Bennett… who is without twin and still alive in Grady’s Ground.

Confounded by the mysterious crazy, hampered by the fanaticism of the religious zealot’s outside the city, and impelled to seek answers to the Star Cities’ origins, Waldron, a band of Russian dissenters, and a host of minor characters aim to settle the rumors, quash the untruths—hypnotism may be a key in understanding why children can enter the Cities while adults turn crazy.

Essentially a mystery filled with knavish characters, The Day of the Star Cities isn’t very enticing as a mystery. The Cities are dull monoliths as are the aliens; neither are explored to any length, so rather than being awed by the pellucid behemoths, the reader diverts attention to future history within. With the destruction of all nuclear piles under 1.2 kilograms (or thereabout), industrializes countries have been ravaged by blasts and radiation, thereby crippling the power of each government. Sadly, how people fare in the headless Union isn’t covered very well.

The knaves which inhabit the plot are all pretty uniform—out for themselves, out for money, or out for power: “Greedy, unscrupulous, careless of the future” (120). Things are so bad and unpredictable, some claim that it’s “a damned sight safer dealing with the aliens than with our own lunatic species” (103). Ever since the occupation, humans have been unable to contact the aliens so any such dealings with the occupiers are pure myth. The only glimmer of light shed on the aliens is when a nebulous clouds descends on a stolen artifact (a mystery of which is left to taper off and die).

Eventually, Brunner returns to two time-honored favorites of his: spies and hypnotism. Psycho-spies are a minor element of the plot but the existence of it irks me endlessly along with hypnotism, a seemingly faultless science of the future, which is used to resolve a key plot hole. The solution is lazy and overused, lazy being an adjective which could encompass much of the book—perhaps this is why Brunner rewrote it, extended it, and republished it eight years later in 1973. I can’t compare the two, so this is purely hypothetical.

Some earlier Brunner is surely much better, The World Swappers (1959) and Meeting at Infinity (1961) among them, both Ace paperbacks. Naturally, some later Brunner also suits my tastes: Quicksand (1967) and Stand on Zanzibar (1968), for example. Though one of my favorite authors, Brunner is still hit-or-miss. This being the 27th Brunner book I’ve read, I stand by my conviction with an air of reassurance gained through the thick and thin, good and bad of what Brunner has had to offer the reader… yet, this journey is far from complete.
Posted by 2theD at 1:29 PM