Dark, subtle tones of deceit and exploitation in capitalism (5/5) 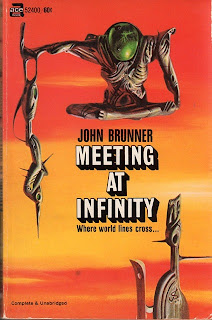 Another reason Brunner remains my favorite science fiction author! After reading fourteen novels by Brunner and thinking "I must have seen it all", I pick up a mint-condition 1969 Ace edition of Meeting at Infinity (1961) and realize that Brunner holds as many surprises as he does mysteries. Being one of his earlier novels, it's a great place to start if you avoid The 100th Millennium (1959) and Echo in the Skull (1959).

For a 1960s novel and only being 155 pages, the complexity and intrigue Brunner manages to weave into the fold is impressive from the cryptic start in the prologue. It's one of those novels, which as soon as you start, you realize you going to need to take notes. It's not like a droning lecture on economics where every topic holds some importance, rather it's to keep track of the variety of character names and character duty (for me, plots are easier to track than characters).

The Earth we know has discovered the science of transportation to parallel worlds of alternate histories of earth. With this connection comes administration of the new earths and the import of items. This administration is controlled by The Market, who are strict about import because of the White Death which was accidentally imported and destroyed half the earth's population.

Ahmed Lyken is a mercantile prince with a franchise over the earth-sister planet of Akkilmar, linked by Tacket portals to Earth. The portal/planet administration in The Market finds the latest shipment of wheat to contain a mold and they move to strip the planet from Lyken, albeit with ulterior motives. Lyken won't go down without a fight and begins to recruit resistance among the city's masses. A detective named Athlone hunts for an attempted murderer, Luis Nevada, but only becomes entangled in the web of deceit which The Market had begun to spin. Nevada was cleared of murder charges because his wife lived through her ordeal and she is now supported by an exotic technology imported from Lyken's earth-sister of Akkilmar... which is the nexus of struggle conveyed in Meeting at Infinity.

That rather lengthy summary only touches about 15% of the overall plot, which only becomes headier and headier with each passing chapter. It's a novel requiring concentration and understanding; it's not a novel to be picked up and read on commute or when bored as it requires some passages to be re-read. With the logistics aside, the reader will also be immersed in a subtle yet rich urban landscape which Brunner creates. Without as many words, Brunner paints a dreary, capitalistic society bent on segregation and exploitation yet still managing to survive because of the love/hate connections between parallel earths. A timeless essence shrouds the ongoings of the scurrying street gangs, the lofty administration, and the preparation of battle for the earth-sister of Akkilmar. The dark and subtle tone of the onset of the novel is engrossing.

Compound this eternally nocturnal setting with a cast of quickly yet craftily humanized characters and you'll the life emerge from the pages: "The Rememberancer gave a nod; he liked to recite verbatim, which was his greatest pleasure because it was his only accomplishment." (page 21) With a single sentence, the reader can identify with the quasi-profession of the Rememberancer. Another particularly well crafted wordiness orchestrated by Brunner is how he ignores a simple sentence like "Then he fainted" and spins it into, "Curdy let slip his hold on consciousness and drifted into the comfort of darkness again." (page 147)

Meeting at Infinity is a complex yet fascinating gem in the hit-or-miss bibliography of Brunner. This early "definite HIT" of Brunner's launches itself into my Top Three Brunner novels thus far, along with Total Eclipse and The Long Result. Onward it is, with the other 10 or so Brunner yet-to-be-read novels lining my shelves!