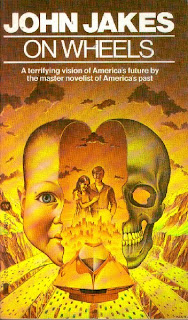 I have to admit that John Jakes has a quirky vision here: America becomes so over-crowded that 10% of the population permanently live on the super-superhighways of America, traveling in clans with interlocking vans which can be dormitories, garages, bars or hospitals... all the while NEVER dropping below 40 miles per hour. The rear cover synopsis reads:

"John Jakes... careens into America's future On Wheels. This is the time of clans in vans. Caravans of clans in vans roll out their lives, their loves, their war, their retribution on superstrip America - land of the autos that steer the lives of those inside them on accelerated hallucinatory highway of tomorrow.

Remember the rules of the run! You are sentences for life to do no less than 40mph at all times. To drop below that speed means death. The future is here: the automotive revolution has finally overrun human evolution. This is life- One Wheels"

The premise may be somewhat cheesy and the delivery is kind of cheesy, too, but try to imagine living a life on the go, where racking up 50 million miles on your car would be an outstanding achievement. In the age where internal combustion engines are outlawed (but the clans still have a few for some fun) but your caravan of supposed "eco-friendly" cars traverse the American continent for the simple sake of having a place to call their own. Why is it illegal for them to stop on an off-ramp or approach a city center? The question is intriguing but don't beat yourself up over the answer because it's rather obvious.

Besides the trying notion of living the "fast life", John Jakes offers up a two-for-one in On Wheels: (1) the reader gets to experience a few car races races among road clans involving fiery deaths and crunching metal and (2) the blossoming and wilting of two youngsters in marriage. The love is superficial and scantly believable but you don't read On Wheels for the love story! While I do enjoy an occasional car chase sequence in a novel (mmm, that doesn't happen often actually), the wilting of the marriage between the young protagonist stud Billy and beauty queen of another clan Rose Ann is terribly annoying to watch unfold. Jakes stereotypes Rose Ann as an unforgiving and illogical vixen out for blood rather than a sensible and purposeful individual seeking companionship and understanding. Ever encounter with Rose Ann proves to be irksome and yet Jakes writes the protagonist Billy as the "man who stands by his woman with honor". Again, it sounds cheesy, right?

For a man who loves long-winded book reviews (I'm happy to be accused of that), I'm a little shocked that there's not much else to say about On Wheels. The reader should come for the unique setting of the future of the American lifestyle and how people get on with gettin' on. Jakes definitely has a spark of originality in him but I hesitate to procure such novels with terrible covers as Mention My Name in Atlantis and Six-Gun Planet. Regardless of the covers, I'm sure I'll pick up the next Jakes novel I come across.
Posted by 2theD at 11:34 PM