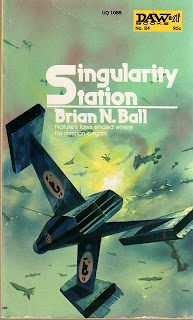 Brian Ball hasn't penned a large number of science fiction novels and the ones you do find are obscure derelicts from the 1970s. Leave it to DAW to publish one of Ball's books (#84) and leave it to me to choose the obscure books from the shelves of the second-hand book store: it's what I seek and savor. And savor I did with Singularity Station.

Read cover synopsis: "Robotic minds made interstellar travel possible, but human minds still controlled the destination and purpose of such flight. Conflict develops only when a programmed brain cannot evaluate beyond what is visible and substantial, whereas the human mind is capable of infinite imagination - including that which is unreal.

Such was the problem at the singularity in space in which the Altair Star and a hundred other vessels had come to grief. At that spot, natural laws seem subverted - and some other universe's rules impinged.

From Buchanan, the station meant a chance to observe and maybe rescue his lost vessel. For the robotic navigators of oncoming spaceships, the meaning was different. And at Singularity Station the only inevitable was conflict."

Fairly wordy for a synopsis but it covers nearly everything that makes this 176-page novel a savory morsel to seek out: Buchanan was captain (but not navigator) of a passenger cruiser when the robotic navigators approached the singularity. Buchanan knew the dangers but the robots believed that such a thing could not exist, therefore there was no danger. Because of Buchanan's persistence, the robots ejected the captain from the ship and he witnessed the ship dive into the void.

A handful of years later, with his relationship on the rocks and his partner going back to her home planet, Buchanan applies for the sole post at the observation station near the singularity. His distrust (bordering on hate) of robots allows him to ignore their beckoning calls of oversight. He pushes the station to its limits to explore the singularity rather than to casually observe it.

Meanwhile, his ex-partner Liz accepts a free ride back to her planet by way of the companies convict transport ship, which is heading her way. With the convicts in stasis and the crew a wholesome bunch, the trip should smooth-sailing (intro ominous music). BUT, a much feared cybernetic mad-scientist and criminal is aboard and has subverted the freezing process. With his self-release and utter control of all the  class-1, class-2 and class-3 robots secure, the scientist seeks further escape from the penal cruisers towards the singularity. With Liz aboard acting as his logical conscious, can their death be avoided?

Half-way through the novel, most of the mentioned plot had already occurred. There was a lot happening and yet it was easy to follow the electrifying plot strands: Buchanan groveling in his obsession at the singularity's station and Liz's penal plight with the crazed scientist. I didn't think the novel had the steam to carry the momentum produced in the first half, but after a number of chapters it was obvious that the plot endurance was perpetual. I was wide-eyed with anticipation, my mind was a-bubbling with bountiful possible conclusions and, I swear, my pulse was racing. Kid you not.

There are exciting elements (pretty much the whole novel is gripping), there are very human elements with characters exhibiting idiosyncratic flaws and there is even humor based in the human-robot interactions. The robots are strictly logic oriented and the human commanders are typically vague and snippy, requiring the robots to ask questions repeatedly, in differing ways with a sophisticated snobbish attitude. It has everything a solid stereotypical science fiction novel ought to have: brevity, wit, humanity, action, robots, spaceships and a mad scientist.
Posted by 2theD at 11:29 PM