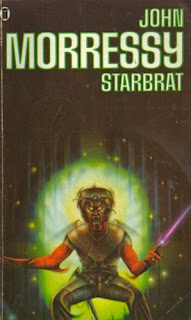 John Morressy is better know for his fantasy in the Kedrigern Universe but has also made a foray into the science fiction genre with Starbrat (the first book in a series of six) and a single edition of The Extraterritorial. If you can squirm past the irksome sight of the cover and refrain from cringing at the generic title, inside the book there is all-too-rapid plot set amid a post-diaspora galaxy where humanity has colonized the stars for forty-seven generations. Old Earth is just a memory as one man is kidnapped from his bucolic home world and finds himself at the center of more than one galactic stage.

Del is small for his age on the planet of Gilead, where life is slow and the work on the farm takes precedence over everything. Del (short for Deliverance-from-the-Void Whitby) has faster reflexes than his counterparts and the reason for this is given to him on the eve of his rite of passage: he was delivered as a baby to the planet in a mysterious single-man craft with an illegible piece of paper. Soon after this revelation comes to light, Del is kidnapped by space pirates (oh my!) while protecting his sweetheart from the grips of the slave mongers.

Once upon the ship, the pirates discuss what to do with little Del. When one pirate speaks ill of his sweetheart, Del must defend her honor while aboard the spaceship, where his nimbleness and swiftness allow him to fall the beast of a man. It is thus decided to take Del to a planet which sees human combat as the greatest sport. This is where Del begins his second life.

Del has a humble upbringing which drives him to seek out his home planet and return to his sweetheart. After his departure from the gladiator/arena planet of Tarquin VII, his fighting skills take him around the planets at breakneck speed. Each planetfall results in a mini-adventure for Del and his expanding crew of noble yet fearsome cohorts, but what Morressy doesn't do is weave it all together in a tidy manner. There are too many coincidences for such a large galaxy; too many links to the past; too many tiny revelations regarding Del's ancestry. The last 10% of the book skips decades and decades, distancing the reader from Del's ordeals and leading to the sequel... which doesn't even have the same protagonist but takes place in the same universe Morressy has created.

There are some great aspects to Starbrat like the aforementioned planet Tarquin VII and Watson's planet, where data is currency and a supercomputer governs all. Also, the galaxy teems with life. "...the races of the galaxy were a homogeneous bunch... they were homogeneous enough to interbreed successfully." The other viviparous aliens aren't explored in great detail (as a matter of fact, nothing is really explored in great detail) but one or two aliens do play key roles in the later chapters.

It's not a boring read because of all the commotion but then again I do prefer a calm setting with lots of romantic description and vivid imagery. Starbrat sulks in th 2-star region before one twist of plot ratchets it up to three stars. This twist is a culmination of years of physical and mental effort on Del's part and provides the means to his final decision. It's a well crafted move but leaves the end of the novel flapping in the wind. The sequel Nail Down the Stars doesn't have any appeal to me but I have already purchased his other science fiction novel, The Extraterritorial. I don't hold great hopes for it.
Posted by 2theD at 9:48 AM