Must Read Anderson; Erelong be Smitten (5/5) 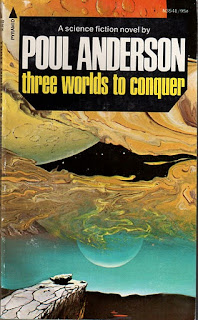 I'm a well seasoned in reading Anderson novels, this being my fourteenth. It also happens to have become my favorite Anderson to-date! Tau Zero ranks a close number two and Brain Wave a respectable number three. Three Worlds to Conquer has an intrinsic "oldie" feel to it, perhaps because of its 143-page thickness, its nebulously painted cover or simply because the plot has certain Golden Age qualities to it. Regardless, I'm very fond of this novel as it exudes a certain sexy nostalgia for science and space exploration, something missing in modern science fiction.

Rear cover synopsis:
"JUPITER: where no human could live- but where men had strange allies... and stranger enemies! GANYMEDE: where human settlers lay helpless under the guns of a spaceship directed by a madman! EARTH: freed from a planet-wide tyranny, but facing total destruction for space!
The destiny of these worlds were strangely linked- and in the hands of a man sentenced to instant death!"

Excellent synopsis for a novel! It pulls no strings, doesn't promise anything it can't deliver and offers little hint as to the greater scope of the plot. I tend to read the synopsis AFTER I've read the book because I like to be surprised by the content of the novel... somethings the damn synopses give away everything or promise too much. To further expound:

Mark is a contact specialist of sorts who is in contact with an alien race on the surface (!) of Jupiter. Having created a new language between his own tongue and the aliens tongue, Mark is the best at what he does. He is also skeptical of the arrival of battleship USS Vega at the mining base of Ganymede. The admiral spins a lengthy story of how earth government (controlled by the almighty USA of course) had fallen to rebels. The battleship is on the moon for the sake of taking control of its mining facilities in order to process materials for nuclear weapons so that they can oust the rebels with brute strength. Lorraine is a collaborator with intentions of sabotaging the tyrannical hold the admiral holds over the colony. When Mark and Lorraine conspire together, plans for escape and control grow rapidly.

In a parallel plot, the alien in contact with Mark is named Theor. His Nyarr clan is becoming close to being invaded by the larger, more brutal and uncivilized Ulunt-Khazul clan. The communicator (a neutrino communicator beaming conversations up to Mark) fails to impress the heathens after Theor fails to contact Mark. Thus begins a sea-battle and land-battle amongst the two clans. When Theor is captured, his relationship with his "mind-brother" Mark will be called upon for the sake of both individuals.

I think Anderson had a great thing going with the Theor plot line and having a human plot in parallel to this only strengthened each plot.

Three Worlds to Conquers suffers from one early SF element which plagues other novels but leaves this book without damaging effects: that of the "I got a sudden idea" syndrome, where crafty plans for escape or retribution are fabricated from thin air, bless the ever-whimsical protagonist capable of this feat! One more minor quirks which you'll come across is the 1960s fixation on the infinite wonders of pharmacopoeia. There's always a pill that'll fix something (effects of gravity, banishment of fatigue, unexpression of emotion, etc.). One last irk is one exclusive to Anderson, himself: he loves to use archaic Middle English or Olde English words throughout his early novels be it in dialogue or narration. Here's a short list of annoying words: behoven, erstwhile, yonder, erelong, belike, lest, beset, nigh and (my favorite) thundersmitten.

If you can look past the points above and suspend whatever science knowledge you have about the atmosphere and surface of Jupiter, then you're in a for a excellent action-to-the-last-page novel,easily read in one or two days.
Posted by 2theD at 4:06 PM