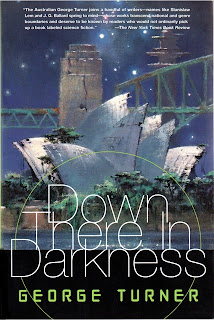 An amazing mix of sciences of psychology, genetics and sociology is unfolded into the plot, which spans 130 years (2033, 2068 and 2168) and touches the expanse of human consciousness.

During the 2030s, Earth is in an era similar to the Roaring 20s during the 1920s. The economy is growing (as well as the population) while everyone is blissfully ignorant of the imminent ecological collapse around them. At this time, an experiment is conducted to probe question within the mind through sensory deprivation, which ends in one man becoming comatose.

Fast-forward to the 2060s and the world has obviously taken a turn for the worst: global warming, joblessness, crime, paranoia... the works. Turner writes, "It was a time when murder was commonplace; respect for life was not a prime commandment in a world wherein the vast bulk of population had no hope of rising out of Suss poverty and nurtured little morality beyond self-preservation." Main character Harry gets a strange case about an experiment from the 2030s and is asked to probe the repercussion of the comatose man's wakening. It's shrouded in mystery as the man hasn't aged and has been given over to a cult church by his own wife. Harry calls on his friend Gus to assist him in the awakening along with a psychologist and a host of observers.

(I just realized that the same two characters Harry and Gus are in this novel as well as The Destiny Makers. They have the same disposition and jobs. Perhaps it's time for a re-read!)

The plot then links the story to the year 2168, one hundred years later, and we find Harry and Gus confronting a more terrible future. Here, the few people still alive are "products of an inheritance too garbled for resolution by nationality." They must confront a new world order and the unfortunate history which has passed them by.

It's a mind bending read, which isn't based far from the current speculative future we are seeing today