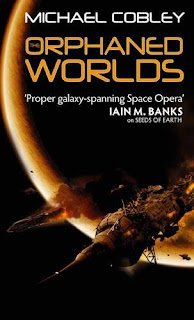 I had read Book One, Seeds of Earth, two months ago but I found it hard to start to get into Book Two right from the start. The character appendix in the back of the novel was too limited to refresh one's memory and the additional species appendix was just a terse blurb about the average height, body hair distribution, locomotion and vision of each species. A heftier appendix would have been much appreciated but instead the reader is left with a rather unhelpful few pages.

Once the plot gets moving, the bits and pieces from Book One begin to slowly fall back into place. Like Book One, each chapter shifts point of view between the characters and in Book Two we experience about nine perspectives. Like Space Opera ought to be, it's a large platter to eyes and mind to digest. As a means of synopsis, I'll review the nine perspective alphabetically and sequentially:

1) Cat has risen to become the keeper of the forest on the Nivyesta moon, where she witnesses the continual destruction of the forests by invading forces. 2) Chel assumes the role of middle-man between the Sentinel and Greg as the both begin to understand their true role. 3) Greg is the head of the rebel force on Darien and continues to hide and resist the Brolturan forces. 4) Julia and her Enhanced counterparts are raided by pirates and forced to use their minds for the evil purposes an organized quasi-religious cult. 5) Kao Chih remains a pawn in the great game of the galaxy he he finds himself used yet again, this time as he visits his home world. 6) The Knight of the Legion of Avatars is still striving for access to the warpwell through victories and setbacks after arriving on Darien. 7) Kuros, the Sendrukan occupier on Darien, maintains a calm demeanor even amid critical appraisal of his activities surrounding the warpwell. 8) Robert, the ex-Ambassador from Earth, continues his ethereal journey through the scores of tiers of hyperspace in search of deities and salvation. 9) Theo leaves his world of Darien for the realms of space with the captured Tygran soldier and his cohorts who aim to overthrown Marshel Becker.

Some of these storylines cross paths and some diverge through the 603 pages of text but there are two separate lines of activity going on. The one line Chel, Greg, Kuros and Cat limits itself to the planet of Darien is, for about 90% of the book, keeps a fairly low profile with more suspense building that actually getting things done. The other line of activity rests with Kao Chih and Theo, who are traversing the great expanse of the galaxy from base, to planet, to orbital and back again all the while collecting more minor characters amid minor skirmishes and observations... which is exactly the more exciting line of activity where the "deus ex machina" pops in.

OK, it's science fiction. All the sciences of ancient races can't exactly be known to everyone (especially the reader) and these science can seem like magic sometimes, as it has been said by Clarke. But when beams lock-out ship control, when wormholes are spawned between ships, when hyperspace missiles go undetected, when psi-symbiotic motes repel any given attack, when a handmade remote control tricks surveillance, when a pilot casually records and loops video footage... the long combination of the easy use of technology at hand teeters on unbelievability. One or two technological punches through the plot would have been acceptable but the wanton use of it is sloppy.

One more paragraph with minor quips... I felt that the pages from 150 to 160 were inconsistent with the rest of the book. The plot went through a transition from being like Book One to being inconsistent with its precursor. For example: After page 153 the now-dead drone of Drazuma-Ha* loses the star at the end of its name. The once amicable relationship between Greg and Chel begins to feel washed out after they urbanely reunite and exchange cold greetings on page 158. The dialogue between Kao Chih and Silveira seems to be missing another paragraph or two as Silveira refers to something Kao Chih didn't even mention (pages 150-151). Again, minor gripes but a little sloppy.

Not bad at all. A little long winded with all the inclusions of the ever present deus ex machina, but nevertheless it's an eye-opening space opera- it offers a sense of wonder at the array of species, planets, customs, modes of thought and visions of the future. Sometimes it's difficult to understand what the F is going on (like all the oddities down there in Hyperspace) but in the end I'm left wanting more. Bait and hook... ready for Book Three!