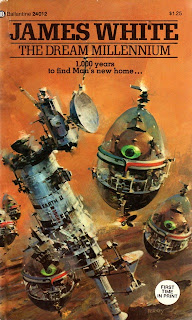 James White continues his characteristic plot scheme by involving a doctor and medical science throughout the storyline even though it takes place outside of the Sector General universe. Rear cover synopsis: "Earth was a polluted, dying planet. Violence was rampant and civilization was doomed. If Man was to survive, John Devlin had to find him a new home somewhere in the galaxy. He had 1,000 years to look - and 1,000 years to dream. But all his dreams were nightmares..."

Leaving Earth on a 1,000 year journey to ten solar systems with possibly inhabitable planets, the 200+ colonists of the craft enter a cooldown, where they agelessly sleep away the years only to be occasionally revived every hundred of so years to exercise and to remember. It is during this cooldown when Devlin experiences fantastic dreams of others' lives; of royalty, of saurian origin, of revolution, etc. Why is it that Devlin remembers each dream so vividly and why is it that he can recall pre-departure events just as clearly? His recurrent awakenings probe this mystery as the recall becomes stronger and as he discovers the body of one of his fellow colonists frozen to the cold steel of the bulkhead in an apparent suicide.

The first third of the novel has a bizarre yet wonderful scope involving Delvin's awakenings aboard the craft, his life prior to recruitment and his vicariously realistic dreams. This is entirely rich and vivid; unlike anything White has produced (this being my 7th White novel). The plot is more like a John Brunner novel, involving characters in extraordinary circumstances amidst the stars. The fallacy springs about midway through the novel when the majority of the text starts to focus on the vicarious dreams; life after life after life, only to end in death each time. The spotlight is taken away from the great millennium journey and its righteous goal of establishing a human colony on a distant star when Earth itself is dying.

I can see White's noble approach to probing one man's mind, his dreams and his meaning to the greater extent of the mission at hand. But the repetitious mini-lifetimes doesn't add much depth to the purpose of the very same dreams, which is made a little more clear towards the end of the novel. This journey inwards versus the journey outwards is a decent attempt but overshadowed by Pohl's Gateway, which is pristine in inwardness/outwardness. However, as far as a White novel goes, this is one of his more thoughtful and unique novels.
Posted by 2theD at 12:44 PM