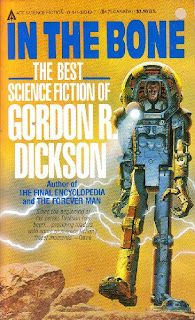 I've known Dickson by reputation alone: well-known for his Dorsai! series and once described as a science fiction romantic. When I first read his work in was, unfortunately, his 1977 revision to his 1965 novel Mission to Universe. Whatever had been revised must have been the downgrade quality compared his short stories in this collection, In the Bone. Mission to Universe was weak is nearly all regards.

In amazing shift of probability, In the Bone is a collection of very thoughtful pieces gently revolving around two similar themes: fathoming the alien condition and alienation from humanity or the human condition. These two themes are something I give some spare thought to from time to time. Such as, if humans were to be contacted by aliens, would communication even be feasible? My thoughts on this are that aliens will be exactly what the world implies in all regards: will be know they even exists, if we do then our modes of communication will be wildly different, and if we can communicate then our worldviews and sensation will not be translatable. This is reflected in Dickson's short stories. In this regard, I've felt a syzygy of thought with Dickson and has led me to really love this collection! In fact, Dickson has about twenty more collection out there! Wow, I'm getting dizzy with near-giddiness.

Twig (1974) - 4/5 - Twig is a human connected with the planet-spirit, named Grandfather, of Jinson's Planet. Remaining hidden in her nurturing forest, the slash and burn farmers wish to find and kill the Grandfather but her communication with the Earth visitor from Paraplanetary Government may thwart the witch-hunt. 33 pages

God Bless Them (1982) - 5/5 - Merlin snags a chance to train for work in space amidst the failing American economy. His only expense is paying for Californian detective agency to search for his wife and his only annoyance is a tag-along by the name of Church adds to his pressures; but which one will put the nail in his coffin? 25 pages

Hilifter (1963) - 4/5 - Locked from the outside, a hijacker is stuck in his cabin cubicle and must find a way out of the room, through the levels of the spaceship and into the control room to wrestle control from the commander for the good of the colony planets. 19 pages

Brother Charlie (1958) - 4/5 - Human mediator and two individuals of the two terrestrial species of intelligent life on a planet crash in the sea (home of one species), make it to land (home of the other) and head for the human's Base. The human tries to have them understand each other's viewpoints and to just get along. 32 pages

Act of Creation (1957) - 4/5 - Man witnessing the death of the son of the creator of androids in the Dorsai universe pays him a visit and witnesses for himself the humanity of the creator, himself. 11 pages

Idiot Solvent (1961) - 5/5 - Art only sleeps only seven hours per week and is hired for a study in sleep deprivation and intelligence. After ten days of no sleep, being doped with the "monster", and escaping the building, the man babbles incessantly and is eventually brought back and given hypnosis. 18 pages

Call Him Lord (1962) - 5/5 - (1966 Nebula: Best Novelette) Prince and heir-apparent to the galactic throne visits earth to sample what life is like on the backwater planet, original home of humankind. His conceited palatial attitude is accepted by his bucolic bodyguard even when the Prince causes trouble with the villagers. 22 pages

Tiger Green (1965) - 4/5 - Plagued by paralyzing nightmares and suicidal tendencies, Exploration Team 529 is stranded on a planet which is attacking its ship and crew. Four of the seventeen have put off the xeno-possession and attempt contact with the natives, whose circular logic has them very confused. 23 pages

Of the People (1955) - 3/5 - With charm, influence, and inventiveness as his attributes along with the power of ultimate persuasion, Sam leaves New York to seek out a Himalayan yogi in order to transcend. 5 pages

Dolphin's Way (1964) - 5/5 - Dolphin researcher fosters a notion that successfully communicating with the dolphins will open up communication with extra-terrestrials. With research funding on the brink of collapse, the researcher is eager to spill forth his knowledge and ideas to a beautiful visiting reporter. 18 pages

In the Bone (1966) - 5/5 - Man technologically equipped to traverse the stars and explore new worlds finally meets another intelligence, who zaps him from the sky, disables his precious machinery and reverts the modern man back to his primal self to survive in the alien landscape in the shadow of the alien pyramid which struck him down. 22 pages