Peek into a President's Public/Private Life (4/5) 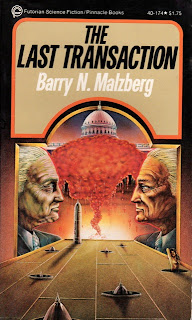 Rear cover synopsis:
“…The Last Transaction is a deep and fascinating glimpse into the memories, inner compulsions, torments, triumphs, and events in the life of a President of the United States in a world gone mad, from 1980 to 1984. Even more, it is perceptive vision of the major issues our society will face tomorrow. Sure to be controversial, possibly prophetic, like anything Barry Malzberg writes, this novel is an experience you will not forget.”
This is my first Malzberg novel but it happens to be one of his later novels (1977). Unfortunately, I had to start somewhere and this novel struck my interest. It’s not so much science fiction as it is a twisted look into one man’s mind in the years 1980-1990, so it’s more of a weird fiction novel set in the future than a science fiction novel.
Malzberg writes a novel portraying, much as the synopsis says, the internal logic of one man. These thoughts and memories spill forth from a man slowly sinking into dementia. Now a very frail 80 years old in the year 1990, the 1980-1984 ex-president of the United States is housebound and attempting to complete the memoirs of his life. However, his failing physical health and diminishing grip on reality affects his ability to think clearly and act rationally.
ENTER William Eric Springer
The marriage with his first wife ended on a sour note as she grew continually more haggard and their love life tapering off into negligence. Even the offspring, born out of casualness rather than love, cannot keep them together. With the divorce finalized, William seeks out more steady liaisons with a woman twenty years his junior. They both attend his ex-wife’s funeral and continue with life with the fateful direction of sitting in the presidency. While acting as president, a terrorist group blows up two nuclear plants and threatens to hijack more. With the same casualness of producing a son, the President lightly assesses the situation, which paints him as the man he truly is.
He’s a stubborn man is his later years. He was once mildly uxorious but transmogrified into something blunter, more forward. As an example to his stubbornness during his convalescence, he says, “I am entitled to the integrity of my prophylaxis.” (pg115)
William’s attitude towards tackling major issues is relative to his attitude towards his sex life, which Malzberg isn’t timid writing about in detail (sometimes too graphically, too detailed, too unnecessary). The serious issues, like the intimacy experienced with a wife, are taken vulgarly and off-hand. Oppositely, the lighter issues, such as detailing his memoirs, are taken with single-minded ferociousness.
EXIT William Eric Springer
William’s sexuality characterizes him to a great degree so the sex scenes are validated, but the carnality of some of the scenes is a bit much. The Last Transaction is a 163-page characterization of a growingly blunt man, sinking into senility, resistive of advice, and indolent with sexual reminiscing.
More Malzberg novels is a must for me if his knack for characterization is prevalent in his other works but, hopefully, will lessen the sexuality to a more acute degree.
Posted by 2theD at 10:54 AM