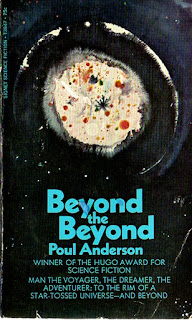 With a remarkably terrible beginning to a collection of short stories, I almost gave up hope with Anderson's collection in Beyond the Beyond. I've haven't come across many of his stories in anthologies but because I'm a fan of his linguistic and space opera novels (twelve to date, thank you very much), I decided that a peek into his short story talent might be worthy the effort to hunt down and peruse.

It's only with the last three stories did I begin to enjoy the collection. The Sensative Man has a spy-thriller tone to it with some psychoanalyzation throw into the mix. The Moonrakers in a decent look into the future unfolding of human civilization in the solar system which naturally must include space pirates. Finally, the cherry on top is a story ala Tau Zero; Starfog is heavy in science, astronomy and language and you may even find yourself admiring the minor love story unfolding.

Certainly, there are a large number of short story collections which trump Beyond the Beyond, but this is a keeper for the sheer sake of the last two stories... but mainly Starfog, which has etched into my memory so soon after its completion.

Memory (1957) - 3/5 - Bygone unknowingly colonialists of a galactic empire find themselves in company with a mysterious amnesiac man who is later recaptured with his hopeful wife by the militaristic crew of an empire ship. 36 pages

Brake (1957) - 2/5 - Extremists aboard a vessel inbound to Ganymede pose as passengers and act mutinously to gain control or hold the vessel as hostage from the captain, who isn't taking this kind of thing lightly. 45 pages

Day of Burning (1967) - 1/5 - A supernova is approaching a once studied planet with its' scope of cultures but that datum is dated, where the archaic language is annoying and the dragging politics can... zzz, zzz, zzz. 42 pages

The Sensitive Man (1954) - 3/5 - A man from a psychodynamic institute is kidnapped by a conniving organization who wish to use his skills for world domination but how will the psychodynamist psychoanalyze the psychos? 54 pages

The Moomrakers (1966) - 4/5 - The tri-pillar economies of Mars, Asteroids and
Earth are pinned against one another in a bid to deal with or destroy the pirates which seep the earnings from the respective governments. 33 pages

Starfog (1967) - 5/5 - A seemingly human race appears on an isolated yet inhabited planet and say they have originated from a stellar cluster; a mystery which calls for an educated Ranger and a probe into their culture and history. 56 pages