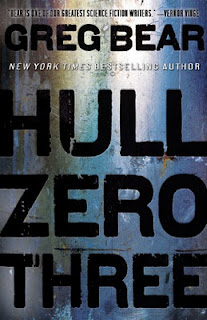 It appears that Hull Zero Three hasn't been very well received on Amazon and that's pretty sad. I greatly anticipated its release and was mystified by the Vine program's negative feedback. To truly appreciate Hull Zero Three, I think the reader needs to meet two criteria, like myself:
1) The reader needs to understand most of Greg Bear's work, including his 1980s and 1990s grand space spectacles of The Way series and Forge of God series). Also, the reader must feel distanced by Bear's work since the millennium (Quantico, Vitals and especially City at the End of Time). This will give you a proper lead-up to what Bear has accomplished and why Hull Zero Three is a return to his grand tradition of space spectacles.

2) The reader must be disappointed in the state of the art of American science fiction. I don't read any of the stuff since the millennium as there's been a preferred chasm of difference with British SF. US SF tends to have very short paragraphs with lots of dialogue and it nearly always reads like a Hollywood scrip for people with short attention spans.

NOW, open up the deliciously ambiguous book entitled Hull Zero Three. Granted, from the onset, the initial "man wakes up on ship with amnesia" isn't exactly unique but banish that from your feeble mind as the subject is at the masterful (er, with the exception of End of Time) hands of Greg Bear. Like the main character, Teacher, we, too are borne unto this novel with little knowledge of what is happening but we grow to understand the environment, the dangers, the expectations and direction: where the Teacher learns so the reader, where the Teacher panics so the reader panics. Identify with this: "I'm just a pair of eyes on the end of a stalk of neck with a brain and some hands and legs attached."

I won't to expose too much detail about the greater scene of the book because it's important that the reader, like to protagonist, learns as he/she goes. So, to just glance over the plot, here it is: Three separate hulls are on a 500-hundred-year journey to inhabit the stars. Something has gone wrong, albeit a malicious deviation of course or a natural phenomenon. People are being awoken, these people are being killed by the Ships machines. On board is the entire Gene Pool of earth and the landing crew will make use of this gene pool to adapt to the environment of the one planet they will fall upon. They have only the one shot to establish their civilization.

I must mention the Gene Pool part of the plot because it's by far the most titillating potential in the entire book. Stop and think about the variation of life on earth and how, in the future, it may be possible to alter man in any way, always abiding by the gene pool, to suit Man for life on other planets. Hull Zero Three visits some minor shifts in the human DNA but always tiptoes around some of the more exotic spectrum of what humans could become. The details revolving around this 500-year trip and the gene pool are hugely enticing and very rewarding.

Like mentioned in criterion #2, Hull Zero Three is unlike anything the US SF has recently produced (this includes Vinge and the peripheral Star Wars, Star Trek and Halo series). No author has gotten it right except for our friends across the pond, many of whom I'm a great fan of: Banks, Hamilton, Reynolds, Stross. Greg Bear writes in a style similar to the British friends, where there is more of a focus on describing environment, emotion, experience and detail with longer paragraphs, more internal monologue and less frivolous chit-chat.

"Exploring," in his purest essence, isn't about banally chatting about what you're seeing... it's about internalizing the experience and relating yourself to your surroundings. Much like Hull Zero Three - you'll explore the Ship (Hulls One AND Three!) through the internalized experience of Teacher. However, you'll also be grappling with the fear of death, dismemberment, starvation and suffocation. Great contrast.